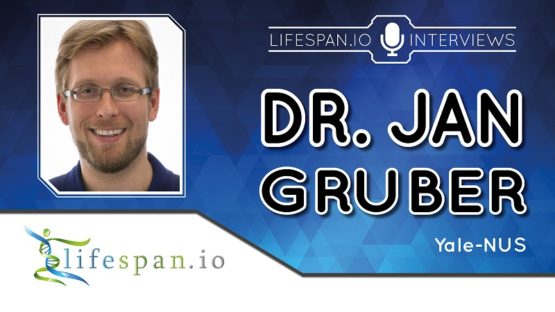 Jan Gruber and his team at Yale-NUS have recently completed a detailed set of studies looking at eleven of the most promising anti-aging single drugs, using nematode worms (C. elegans) as their model organism.

Even though testing the effects of single drugs on health and longevity in various organisms is challenging by itself, and testing multiple drugs and their synergistic effects can be a logistical and statistical nightmare, they found some surprising results, including up to a 96 percent increase in lifespan [1]. As they conclude in their new paper:

We show that dramatic lifespan extension can be achieved by targeting multiple, evolutionarily conserved aging pathways and mechanisms using drug combinations. Using this approach in C. elegans, we were able to slow aging and significantly extend healthy lifespan.

The triple combination of rifampicin, psora-4, and allantoin was associated with the largest lifespan improvement of the eleven substances tested individually and in combination. Rifampicin, rapamycin, and allantoin resulted in an 89 percent increase in lifespan.

Of course, these results do not directly translate to humans because of the significant differences between nematodes and humans. However, as more studies like this are conducted, we’ll start to gain a better understanding of potential synergistic effects on humans as well.

Gruber is currently an Assistant Professor at Yale-NUS (National University of Singapore). Before his appointment, he was a Senior Research Fellow in the Neurobiology and Ageing Programme at the Centre for Life Sciences (CeLS) at NUS. During his Ph.D. work, he also developed and implemented functionality for CCP4mg, a widely used and freely available molecular graphics package. CCP4mg enables macromolecular visualization, scientific illustration, and structure-based drug design.

I conducted the following interview with Gruber by email in late 2018.

You and your team conducted a complex set of experiments using eleven of the most promising anti-aging single drugs. You found some strong synergies with combinations of these drugs that resulted in up to a 96 percent increase in lifespan in your nematode worms. Can you explain how you came up with this set of experiments and how you selected the eleven single drug candidates?

We did not have a large, dedicated grant to support an extensive high-throughput screen, but I felt that drug synergies and interactions were under-explored and a potentially promising way to design better adult-onset interventions.  We, therefore, designed a relatively small, proof-of-concept experiment with the aim of showing that. The aim was to see if synergistic drug-drug interactions can be found and to explore how large a benefit could be achieved.

Our basic idea for this was to combine highly efficacious drugs with distinct but likely interacting mechanisms within the network of genes known to affect lifespan and aging. Since we knew the screen was going to have to be small, we decided not to go about this blindly but to design a set that would give us the best chance of getting at least one positive “hit.”

We first went to a database of lifespan drugs (DrugAge) and selected drugs/compounds with large effect sizes and for which there was good experimental evidence (ideally from multiple labs and in multiple models). We also tried to pick compounds that are or might be human drugs. We then selected a subset for which the proposed or suggested modes of action were different. Based on these criteria, we initially selected ~10 drugs and then validated and optimized these, eventually picking five that worked reliably and reproducibly under the conditions that we use in my lab.

We then did transcriptomics for these five, confirming that the gene expression changes caused were at least partially distinct but also had some overlap. Finally, we tested all (5×4)/2 = 10 pairs of these five drugs and found two combinations that showed significant beneficial interactions.

What was the most surprising finding? What do you think is the most important finding?

That, even within the small set that we tried, we found two synergistic interactions. One of my main concerns was that we might get no beneficial interactions between any of the drugs at all – which was completely possible but would have been very disappointing (especially for the Ph.D. student [lead author Admasu] having to do all those lifespan studies).

From what we got, it seems that such interactions may actually be relatively common and result in significant benefits – although we need to do much larger screens to get a clear idea if we were just lucky (or smart in our original choice). The size of some of the benefits also suggests that lifespan has quite a lot of plasticity left, even when using drugs and only in adult animals.

Why did you focus, along with lifespan extension, on changes in gene expression rather than, for example, the well-known nine hallmarks of aging?

Because we wanted to identify what synergy looks like in transcriptional space and see if our ideas about the way that such beneficial interactions might occur were confirmed or not.

The idea of the paper was to show that synergistic interactions are worth looking for – especially for drug repurposing – and to make a start on exploring ways (other than brute-force screening) to find them.

Our basic approach for that was to try and combine efficacious drugs with significantly different modes of action. The Hallmarks of Aging might be another conceptual way to design synergistic benefits. For example, you could think of combining interventions with different endpoints in terms of the hallmarks impacted by each drug. However, I would expect that you would also see such different targets on the level of transcription, such as in the PCA.

Finally, with sequencing costs dropping faster than Moore’s Law, developing approaches based on this revolution seemed worthwhile – doing this type of analysis is rapidly getting cheaper/faster than lifespan or biomarker assays.

How much can we learn at this juncture about human longevity and drug effects from your experiments with nematodes?

Many of the drugs that we are currently most excited about were first investigated in simple model organisms – or at least such research was vital to establish their roles in aging. The same is true for most of the important aging pathways/targets. So, I think history suggests plenty. In addition, the kind of question that we asked could not be answered with realistic effort in mice, let alone using [human] clinical trials.

What is the main message from your work (if any) about the most promising life extension drugs for humans? Or is it simply too soon to say since there haven’t been any clinical trials on these synergistic effects yet?

Suggesting specific drugs was not the purpose of this study, and I would never suggest taking drugs based on a worm or fly study alone. This is why we sort of did this the other way around and selected several of our candidate drugs from compounds for which there was already interest regarding translation to humans. However, I think the observation that you can take an adult animal and leverage synergy to significantly extend healthy lifespan is promising. There are people around the world working on different approaches to identify and validate drugs and targets for drug repurposing, so I have no doubt that the list of candidate single drugs will grow.

Are you planning to do follow-up research to probe further into possible additional synergies or higher magnitude synergies with the same or similar drugs? Or similar research with mice or rats rather than nematodes and flies?

All of the above. However, as so often in science, one key limitation is funding. Mouse studies are very expensive, and so are some aspects of the mechanistic studies that we are considering. We are applying for funding to do the follow-up work for both of these aspects. In the meantime, we are developing techniques and tools.