Many of the problems caused by one are alleviated by the other. Scientists have found that rapamycin and metformin work hand in hand in diabetes-prone mice, boosting each other’s effectiveness and blocking side effects [1].

Rapamycin and metformin are probably the two most promising anti-aging drugs known. Both have been in use for various indications for decades and have decent safety profiles. However, there are some notable side effects, especially in rapamycin. For instance, rapamycin is known to promote hyperglycemia in some patients, probably by increasing insulin resistance and decreasing pancreatic response to glucose [2]. Metformin, on the other hand, is a popular anti-diabetes drug, which, in theory, should be able to offset some of rapamycin’s side effects.

When tested by the ITP (Intervention Testing Program), the golden standard of measuring anti-aging effect of drugs, metformin failed to significantly increase lifespan in mice. However, in combination with rapamycin, it worked synergistically, leading to a drastic increase in median and maximal lifespan in both sexes (rapamycin alone works much better in females) [3].

Some previous studies have already shown that metformin can alleviate rapamycin-induced insulin resistance [4], but due to different study designs, there is high variability in the results. In this new study, the researchers put the “combination hypothesis” to the test again, using males of the NcZ10 mouse strain, a common pre-diabetes model. The mice received either rapamycin, metformin, or a combination from 12 to 30 weeks of age.

The researchers also evaluated inflammation using histological analysis of several tissues and C-reactive protein (CRP) measurements. The former measures the extent of inflammation, and the latter measures its intensity. Rapamycin and metformin had independently opposite effects on the first metric, with rapamycin decreasing and metformin increasing the extent of inflammation, but the combination treatment significantly attenuated rapamycin’s detrimental effect. Both rapamycin and metformin, and especially their combination, significantly decreased CRP.

Plasma insulin levels, a measurement of insulin resistance, rise in NcZ10 control mice with age. Both metformin and rapamycin were able to decrease them, and this combination was yet again superior to the single drug treatments. Somewhat paradoxically, plasma glucose levels became elevated in all treatment groups early into the experiment. In the rapamycin group, the glucose levels remained high, while in the metformin group and, especially, in the rapamycin-metformin group, the levels gradually decreased down to those observed in healthy B6 mice, which is a strain not prone to diabetes.

NcZ10 mice start exhibiting islet degranulation in the pancreas, a sign of diminished insulin storage, quite early in life. Rapamycin treatment exacerbated this symptom, metformin somewhat attenuated it, and the combination treatment resulted in degranulation levels similar to those of controls.

While generally considered safe, metformin is suspected to be toxic to the kidneys (a nephrotoxin) [5]. In this new study, metformin treatment substantially elevated kidney inflammation (nephritis) levels and the albumin/creatinine ratio, a measurement of kidney damage. Rapamycin did exactly the opposite, and the combined treatment was just as good as rapamycin alone in preserving kidney function.

The researchers gathered their results in a table that illustrates the effects of the combination treatment. In every case in which one or both drugs had a beneficial effect, this effect was fully preserved. Metformin enhanced rapamycin-induced insulin sensitivity despite having no effect on its own. In three other cases, rapamycin-induced deleterious effects were alleviated or blocked by metformin, and in nephropathy and splenic hyperplasia, rapamycin’s benefits were maintained in the combination treatment, despite metformin independently working in the opposite direction. 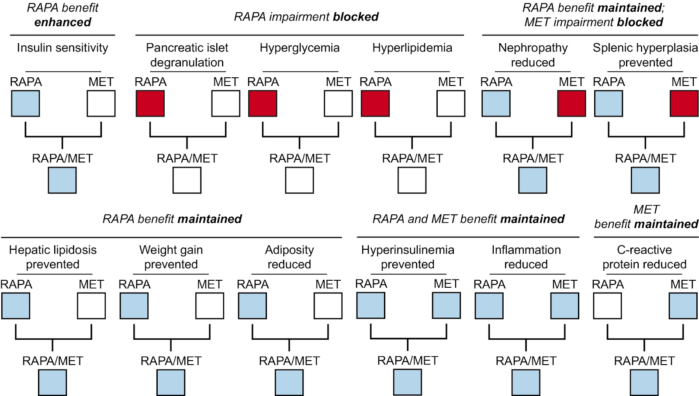 Both rapamycin and metformin are promising anti-aging drugs currently in human clinical trials. However, their mechanisms of action and their effects on lifespan and healthspan in model organisms differ substantially. Despite its limitations such as using only diabetes-prone male mice, this new study demonstrates an intriguing synergy between the two molecules, highlighting the value of combination longevity treatments.