Science to Save the World – Solar Flares

This phenomenon poses a serious risk to electrical infrastructure. 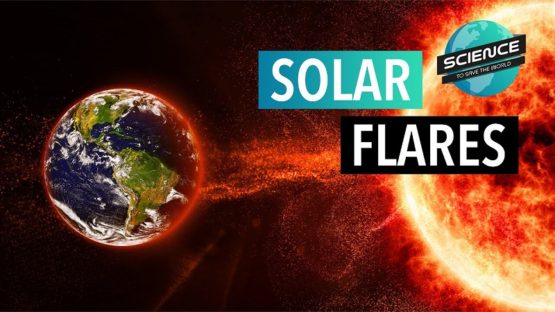 On our last episode of Science to Save the World, we discussed bringing the Sun to Earth, but this time, we discuss the results when that happens in the wrong way.

The sun ejects particles all the time in random directions, generating all kinds of space weather. Occasionally, Earth is caught in its sights. When a coronal mass ejection’s magnetic field is misaligned to Earth’s, a dangerous geomagnetic storm can occur. If we’re not prepared, this could be a multitrillion dollar calamity, with potential loss of life.

Looking closely at the corona, the sun’s outermost layer, astronomers can see wisps, loops, tendrils, and even streams of hot, ionized plasma. These are caused by the sun’s magnetic field, as hot, charged particles follow the magnetic field lines between various solar components. Lines enter and depart the sun in a chaotic manner, with powerful magnetic fields that loop back, split apart, and reconnect on a regular basis.

These magnetic reconnection events can cause not just rapid changes in the intensity and direction of the field near the sun, but also rapid acceleration of charged particles. This can result in the emission of solar flares, as well as coronal mass ejections. Solar flares and coronal mass ejections are composed of fast-moving charged particles emitted by the sun, primarily protons and other atomic nuclei. The sun regularly emits a continuous stream of these particles, called the solar wind.

In our solar system, most space weather occurrences are benign, at least from Earth’s perspective. An incident represents a threat only when it points directly at us.

Our first lines of defense are sun-monitoring satellites and observatories. Most of the time, the majority of solar weather events pose no immediate threat, and simply cause a spectacular auroral display. Until recently, larger events posed little real threat to Earth, but now electricity-based infrastructure pervades our planet. Solar events can induce massive amounts of electrical current to flow through the wires that connect our infrastructure, causing disruption.

Consumer electronics aren’t a major issue. If you knew a solar storm was coming and disconnected everything in your house, most of your gadgets would be fine. The main problem is in our infrastructure for large-scale electricity production and transmission. Uncontrollable surges have the potential to knock down power stations and pump far too much current far too quickly into cities and buildings, essentially frying their circuits.

By disrupting heat, cooling, water, and power, a major solar event could kill thousands, or perhaps millions, of people. To be serious about preventing harm from a solar event, we need early detection.

Only by monitoring the magnetic fields of charged particles from the sun and comparing them with the orientation of the Earth’s magnetic field can we tell if an event will be potentially disastrous for our planet. In the past, satellites could only alert us when solar particles were nearly upon us, providing less than an hour to prepare for their arrival.

We recently got an upgrade with the National Science Foundation’s new observatory, the Daniel K. Inouye Solar Telescope, or DKIST. Four of DKIST’s five scientific instruments are spectro-polarimeters, built and optimized to detect the sun’s magnetic characteristics. DKIST lets us measure the magnetic field in all three visible layers of the sun: the photosphere, the chromosphere, and the solar corona. With this knowledge, we can estimate the orientation of a coronal mass ejection’s magnetic field just after it is released, and we can quickly evaluate whether the expelled material presents a risk to Earth.

Instead of less than an hour, we might have three or four days warning, the time that ejected coronal material usually takes to reach Earth. This is better, but at large, we’re still not really prepared. Most electric stations and substations lack sufficient grounding to divert huge induced currents into the earth rather than into homes, businesses, and industries.

Early warning to power companies to cut off current in their electrical grid could reduce the risks and severity of fires, but this has never been tested. Creating official recommendations for how to cope in a household would be a good step as well.

While our detection capability has advanced, we must now prepare our power grid and our citizens, or we could suffer the consequences in the event of a “big one”.

On this episode of Lifespan News, Emmett Short focuses on a recently published paper in which senescent cells tear off...
CategoryNews, Science to Save the World