Whether or not Altos calls itself an anti-aging company is irrelevant. 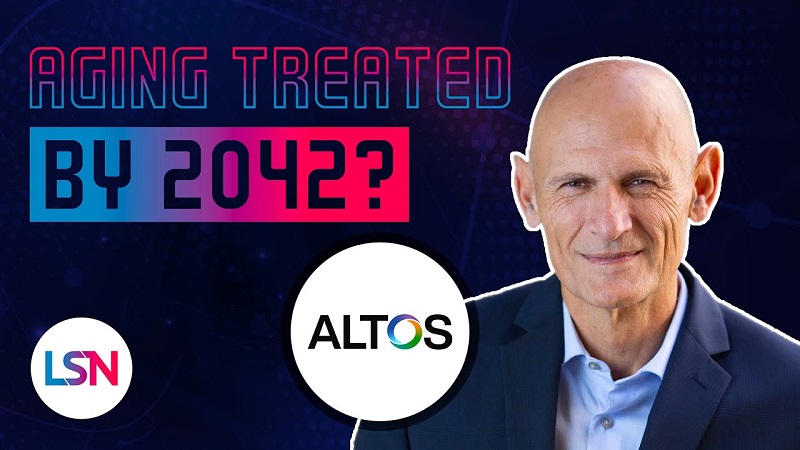 On this episode of Lifespan News, Ryan O’Shea discusses an optimistic but hopefully accurate prediction made by Dr. Belmonte of Altos Labs.

If someone were to tell you that they were convinced that aging could be prevented within 20 years, you’d probably be skeptical. When that person is a leading scientist, working with the best technology and billions in funding, maybe it’s worth listening to. And that’s exactly what happened. We’ll tell you more in this episode of Lifespan News!

As we’ve covered, Altos Labs recently exited stealth mode to announce $3 billion in funding, reportedly from investors including Jeff Bezos, and a team full of Nobel Prize winners and pioneering scientists. However, the secretive company’s representatives insist that “Altos is not an anti-aging or longevity company”. Despite this, a key member of their scientific leadership recently publicly stated that he is convinced that, using the same technologies they are working with at Altos, we will be able to prevent aging within twenty years.

The scientist making these bold statements is Juan Carlos Izpisua Belmonte, a Spanish biochemist and developmental biologist who has spent nearly 30 years pioneering innovations in developmental biology, regenerative medicine and aging research at the Salk Institute.

Among the work that Belmonte is most associated with is cellular reprogramming. As a very brief background, In 2006, a study showed that it was possible to reprogram cells using just four master genes. These four reprogramming factors are often called the Yamanaka factors after one of their discoverers, Shinya Yamanaka, who also happens to be part of the Altos Labs team. Belmonte built upon this work with a promising study in 2016. Here’s how it was described by Science to Save the World.

So, Belmonte and his team of researchers at the Salk Institute demonstrated that the cells and organs of a living animal could be rejuvenated using cellular reprogramming. In the years following this research, their work continued, and it was speculated that Belmonte and his colleagues may spin out a biotech startup built on this research.

Instead, it was announced in January of 2022 that Belmonte would be leaving the Salk Institute to become the director of Altos Labs’ San Diego Institute of Science. Altos Labs says that they are “focused on cellular rejuvenation programming to restore cell health and resilience, with the goal of reversing disease to transform medicine.” Ultimately, it sounds like they are working with Yamanaka factors to master cellular reprogramming, or perhaps more accurately partial cellular reprogramming, in humans.

Recently, Belmonte released new research which, like his 2016 work, involved living mice. The work was published in the journal Nature Aging, and showed that intermittently activating the Yamanaka Factors in middle-aged healthy mice led “to rejuvenating effects in different tissues, such as the kidney and skin.”

Belmonte is already planning similar work on monkeys, and believes it could translate to humans as well. He spoke about this to the Spanish newspaper El País.

We can program and rejuvenate the tissues and organs of animals with different pathologies, as well as rejuvenate their cells. Conceptually, I find no reason that stops us from thinking that similar results cannot be achieved in humans, both with respect to improving the course of many diseases and with the rise in the length and quality of life. Indeed, we have already demonstrated this with in vitro human cells.

Then came this bold prediction.

I am convinced that within two decades we will have tools that not only treat symptoms, but also can predict, prevent and treat diseases and aging through cellular rejuvenation.

He’s saying that he is convinced that within 20 years, so by 2042, we’ll be able to treat aging. I hope he is right. Belmonte also made it clear that, despite the concerns that may exist in the general public, this technology is not expected to be only for the rich.

Our end goal is to find new forms of helping everyone to slow or even reverse the processes that lead to disease.

Our interest is in advancing in this area of knowledge and opening the field as wide as possible, so that, over time, everyone can benefit.

He also made an argument similar to the one that Altos Labs might make when insisting that they are not an anti-aging or longevity company.

The idea behind our investigations is not so that human beings live 100 or 1,000 years more. If we are able to prolong life without improving the quality of these years, not only would it be morally questionable, but also I would question what purpose it would serve… Our main goal is to enable people to have a healthier life for a longer period of time and to reverse illness in patients of all ages.

I think we’re splitting hairs here, but if you can treat aging within 20 years, I don’t care if you call yourself a tire shop. It’s the results that matter, and it’s the results that we’ll be watching closely. When there’s more to share, we’ll have it here. I’m Ryan O’Shea and we’ll see you next time on Lifespan News!