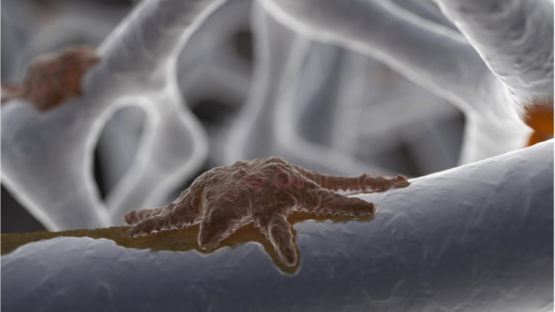 A group of Japanese scientists has found that advanced glycation end products (AGEs) tend to accumulate in osteoblasts with age, inducing apoptosis via endoplasmic reticulum stress. This mechanism likely contributes to the development of osteoporosis [1].

Advanced glycation end-products, fittingly abbreviated as AGEs, are proteins or lipids that have had sugars attached to them via the process of glycation. They tend to accumulate in our bodies with time and play a pathogenic role in the development of various age-related diseases, such as diabetes, atherosclerosis, and Alzheimer’s disease [2].

AGEs have become a popular target of aging research in recent years. One of the aspects that may have received relatively little attention is their role in the development of osteoporosis, a widespread and potentially deadly age-related disease caused by the deterioration of bone matter.

Bone health heavily depends on the intricate balance between two processes: bone deposition (the buildup of bone tissue by osteoblasts) and bone reposition (the eating away of bone tissue by osteoclasts). AGEs accumulating in the bone extracellular matrix have already been shown to impede osteoblastic activity, but little has been known about the impact of the intracellular AGE accumulation in osteoblasts themselves. The current research seeks to elucidate this question to help scientists devise more effective ways of fighting osteoporosis.

Osteoblast apoptosis is thought to be induced by endoplasmic reticulum (ER) stress [3]. Each ER, a cellular organelle that visually resembles folded fabric, is responsible, in part, for protein folding. When the process is disrupted, and the accumulation of unfolded proteins in the ER is detected, the unfolded protein response (UPR) is triggered, and the folding of proteins slows to allow for maintenance. However, if things do not go back to normal soon, the UPR opts for apoptosis. Since AGEs are known inducers of ER stress [4], the researchers hypothesized that the accumulation of AGEs in osteoblasts causes apoptosis via this cellular mechanism.

To check this hypothesis, the researchers treated two lines of osteoblasts, one murine and one human, with glycolaldehyde (GA), which is a precursor to AGEs, and assessed the accumulation of carboxymethyllysine (CML), a well-known AGE. CML was also chosen because its levels were reported to be elevated in osteoporotic patients [5]. As a result of GA treatment, CML contents in the osteoblasts increased significantly. In each cell line, the expression of Bcl-2, an anti-apoptotic protein, declined, while the expression of Bax, a pro-apoptotic protein, went up. The number of cells positive for caspase-3 (a major pro-apoptotic enzyme and one of the best markers of apoptosis) was significantly increased by GA treatment.

The next step was to determine that apoptosis had been induced by AGEs rather than by a different mechanism. By assessing CML concentration over time, the researchers found that caspase-3 activation immediately followed CML accumulation, strongly suggesting that intracellular CML directly induces caspase-3 activation. The researchers then measured the effect of aminoguanidine (AMG), a well-known inhibitor of AGE formation. AMG did slow AGE formation while also improving cell viability and reducing apoptosis. These results suggest that CML accumulation was indeed strongly involved in the apoptotic process that the researchers had witnessed.

The involvement of ER stress

To put in place the final piece of the puzzle, the scientists had to prove that intracellular AGEs induced osteoblast apoptosis specifically via ER stress. CML-modified proteins were detected within the ER, which was a good sign for the researchers, if not for the cells. Several important ER stress markers increased following GA treatment. An additional clue was that treatment with 4-PBA, a chemical chaperone that promotes protein folding and relieves ER stress, was found to mitigate the apoptosis. There are several ER stress signaling pathways that can induce apoptosis, and the researchers were not able to precisely identify the culprit, but they concluded, with a high degree of certainty, that the apoptosis they observed was indeed caused by ER stress.

The researches have conclusively proved that AGEs accumulate in human osteoblasts with age and promote osteoblastic apoptosis via ER stress. This discovery can lead to the development of new osteoporosis treatments based on existing and yet-to-be-discovered AGE inhibitors and ER stress mitigators.