A Connection Between Laminal Dysfunction and Heart Weakness

The nuclear lamina are uniquely affected in heart muscle. 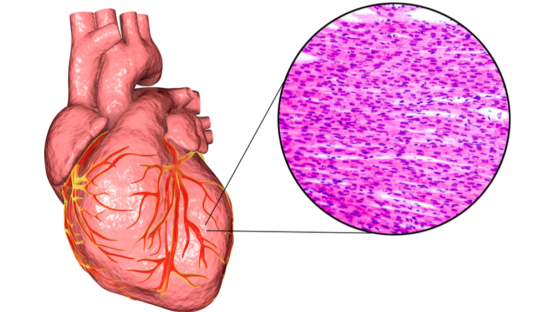 A paper just published in Nature Aging has explained how changes to the lamina contribute to heart weakness in model organisms.

A protective enclosure for genetic stability

Lamin proteins enclose the nucleus in the lamina, the cellular envelope that contains and protects DNA. In progeria, a mutation of the gene that codes for the Lamin A protein turns it into progerin instead. This leads to dysmorphia of the nucleus, thus causing epigenetic dysfunction and direct genetic damage [1]. Progeria is a degenerative disease that causes children to age rapidly, and one of its downstream consequences is cardiovascular disease [2].

However, this mutation of Lamin A to progerin also occurs with ordinary aging, and it is associated with heart muscle disease (cardiomyopathy) in this context as well [3]. To further eludicate the relationship between laminal dysfunction and heart disease, the researchers have employed multiple animal models.

The lamina changes with aging in flies

For their first experiments, the researchers chose the familiar Drosophila melanogaster, a species of fruit flies that is commonly used in early-stage aging research. In two distinct wild-type strains, these researchers found that over the flies’ lifespans, the lamina became significantly smaller and more circular in heart muscle cells (cardiomyocytes). This does not occur in skeletal muscle [4] or connective tissue cells [5].

The next experiment determined the roles of specific lamin proteins. In Drosophila, Lamin C is equivalent to human Lamin A, and the researchers found that both Lamin C and Lamin B were decreased with aging in these flies. Therefore, through RNA silencing, they knocked down each of these proteins in the cardiomyocytes of flies.

Flies with the Lamina B knockdown had softer nuclei that did not resemble ordinary aging. However, one-week-old flies with the Lamin C knockdown had cardiomyocytes that resembled those of four-week-old flies. Their hearts were less able to pump blood, and they had significantly reduced survival. Similarly, these flies’ cardiomyocytes had gene expression that was more like that of older flies. Further testing with genetically modified flies confirmed these results.

Of mice and monkeys

The fly findings were recapitulated in other model organisms. Just like in the flies, in cardiomyocytes taken from mice and rhesus monkeys, the lamina were found to be more circular in a way that does not occur in other cells. Gene expression was shown to be similar in aging, with fundamental transcriptional factors being downregulated in aged cardiomyocytes.

These data offer a prospective explanation of a fundamental mechanism behind heart dysfunction in the elderly. Dysfunctional lamina uniquely affect the nuclei of heart cells, and this has a clear connection with a decline in function.

Together, Lamin-mediated misregulation of myogenic transcriptional programs likely has a major impact on mediating heart dysfunction during aging and may precede the development of heart failure.

This research points towards a potential solution. Intervention strategies that increase Lamin A expression in human beings may be of value in preserving genomic stability and gene expression in the heart and thereby extending lifespan. Considerably more work will be required to determine if such an approach is viable.