The effect was shown in sedentary, overweight people. 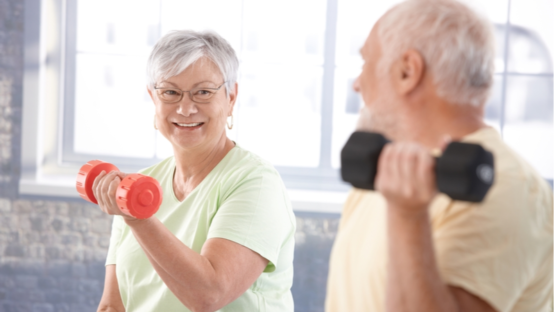 Mitophagy in aging and in disease

Mitochondrial dysfunction is one of the hallmarks of aging. It is associated with age-related skeletal muscle deterioration, which leads to such functional impairments as slow walking speed, loss of muscle strength, muscle fatigue, and atrophy.

Numerous genetic diseases that are caused by mutations in mitochondrial genes or genes that interact with mitochondria are characterized by the same symptoms, which worsen with age. Among these are Charcot-Marie-Tooth neuropathy and Duchenne muscular dystrophy.

Inducing mitophagy, the clearance of damaged mitochondria, is being explored as a way to improve mitochondrial health and, hence, muscle health in aging and hereditary diseases. It could also potentially bring down inflammation, a nasty partner of both.

Exercise activates mitophagy and is the go-to advice for elderly people and people with diseases that lead to skeletal muscle dystrophy.

Maintaining a regular exercise regime, however, is a catch-22 for these two groups: engaging failing muscles hardly seems like a rewarding endeavor. Therefore, dietary interventions are being explored as a way to induce mitophagy. One such compound is urolithin A, which has already been shown to improve mitophagy and muscle strength in the animal models of Duchenne muscular dystrophy [2].

This study was conducted by the Amazentis company, which has previously reported positive results of urolithin A supplementation in older adults [3].

Healthy overweight untrained middle-aged adults between 40 and 64 years old were enrolled in ATLAS, a randomized, double-blind, placebo-controlled study conducted at the KGK Science clinical site in Canada. Most subjects were Western Europeans, with females prevailing.

Importantly, the study participants maintained low physical activity throughout the study. Their lower- and upper-body muscle strength was assessed using dynamometry at the beginning and end of the study. The researchers also conducted a VO2max test and a 6-meter walking test to assess aerobic endurance and physical performance.

First and foremost, the participants in both urolithin A groups showed increased leg muscle strength. The researchers did not observe a significant difference in hand-grip strength in the experimental groups compared to placebo, although the high dose of urolithin A showed a trend for improvement.

In addition, the high dose of urolithin A significantly improved both endurance and physical performance, with increases in distance traveled and walking speed.

Although there was no significant difference in peak power output, the primary endpoint of the study, both peak VO2 and VO2max showed a trend of improvement at the high dose.

The researchers also analyzed the effect of Urolithin A at the molecular level. Plasma biomarker analysis showed improved fatty-acid oxidation along with reduced levels of C-reactive protein and some pro-inflammatory cytokines, indicating reduced inflammation in the high-dose group.

Transcriptomic analysis of the skeletal muscle samples showed that low-dose Urolithin A activated, mitochondrial genes among others, which is in line with previous research.

At the proteomic level, urolithin A supplementation at both doses activated glycogen metabolism and improved mitochondrial function and mitophagy. Proteins related to fatty-acid oxidation, the electron transport chain, the mitochondrial tricarboxylic acid cycle, and oxidative phosphorylation were enriched in the high-dose group, but mitochondrial remodeling proteins were not affected.

Targeting mitophagy to activate the recycling of faulty mitochondria during aging is a strategy to mitigate muscle decline. We present results from a randomized, placebo-controlled trial in middle-aged adults where we administer a postbiotic compound Urolithin A (Mitopure), a known mitophagy activator, at two doses for 4 months (NCT03464500). The data show significant improvements in muscle strength (∼12%) with intake of Urolithin A. We observe clinically meaningful improvements with Urolithin A on aerobic endurance (peak oxygen oxygen consumption [VO2]) and physical performance (6 min walk test) but do not notice a significant improvement on peak power output (primary endpoint). Levels of plasma acylcarnitines and C-reactive proteins are significantly lower with Urolithin A, indicating higher mitochondrial efficiency and reduced inflammation. We also examine expression of proteins linked to mitophagy and mitochondrial metabolism in skeletal muscle and find a significant increase with Urolithin A administration. This study highlights the benefit of Urolithin A to improve muscle performance.

It appears that Urolithin A supplementation could be a valid strategy to increase muscle strength in older people who are sedentary and overweight. Whether it is superior or could be complementary to regular exercise is still questionable. In addition, some dose-specific molecular responses were reported in this study, which calls for further investigation.

Also note that in the declaration of interests A.S., D.D., P.A.A., A.M.F., W.B.-B., and C.R. are employees, P.A. and C.R. are board members, and J.A. and P.A. are members of the Scientific Advisory Board of Amazentis SA, who is the sponsor of this clinical study and who also produce this supplement. While this alone does not invalidate the data presented, this should be noted while evaluating the results.

Metformin is Linked to Weaker Exercise Improvements
0 Comments
A study published in Obesity suggests that metformin may decrease the gains in cardiorespiratory performance brought on by exercise. The world’s most common […]
Posted in: Exercise, News
Tags: Metabolic Syndrome, Metformin

Lifespan News – Vitamin B, Omega-3, and Cognitive Health
0 Comments
This episode on Lifespan News is on a new study detailing how Vitamin B and omega-3 fatty acids work together to improve brain health. Script Researchers publishing in the European Journal of Nutrition have discovered that a […]
Posted in: Lifespan News, News
Tags: Lifespan News