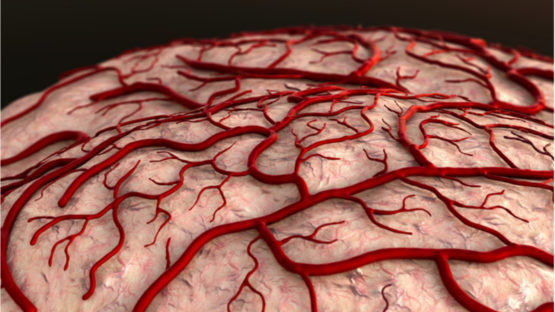 A new study conducted by researchers from Germany and the UK has shown that accumulation of medin, an amyloid of the protein MFG-E8, leads to cerebrovascular (brain blood vessel) disease in wild-type mice [1].

While amyloidosis is most associated with brain diseases such as Alzheimer’s and Parkinson’s, this is not the first time that amyloids have been implicated in vascular diseases. Transthyretin amyloidosis, known as a major risk factor for supercentenarians, occurs when these amyloids build up in the blood, leading to organ failure [2].

It has been known for 20 years that medin aggregates accumulate in the aortae and upper blood vessels of the elderly [3]. However, the effects of these amyloids on vascular function have not previously been analyzed in a mouse study.

How do we know that medins are dangerous?

To explain the reasoning behind their hypothesis, the researchers of this study cited data suggesting that, in humans, medin accumulation is associated with age-related blood vessel decline, including the blood vessels of the brain [4].

To directly determine whether or not medins are a cause of dysfunction, the researchers used genetically engineered mice that could not meaningfully produce MFG-E8 in a way that would allow it to aggregate. They compared the arteries of these “C2 knockout” animals to wild-type mice. Medin aggregates were, as expected, found in the wild-type animals but not their genetically engineered counterparts.

The ability of arteries to dilate and constrict, a critical part of vascular health, was found to be substantially better in aged C2 knockout mice compared to their wild-type counterparts. This strongly suggests that medin aggregates lead to vascular dysfunction, particularly cerebrovascular dysfunction.

Medin is the most common amyloid known in humans, as it can be found in blood vessels of the upper body in virtually everybody over 50 years of age. However, it remains unknown whether deposition of Medin plays a causal role in age-related vascular dysfunction. We now report that aggregates of Medin also develop in the aorta and brain vasculature of wild-type mice in an age-dependent manner. Strikingly, genetic deficiency of the Medin precursor protein, MFG-E8, eliminates not only vascular aggregates but also prevents age-associated decline of cerebrovascular function in mice. Given the prevalence of Medin aggregates in the general population and its role in vascular dysfunction with aging, targeting Medin may become a novel approach to sustain healthy aging.

As with any early-stage study into a potential cause of disease, especially one that has not been given significant attention, this study leaves a lot of unanswered questions. One of the most crucial involves the fundamental biochemistry behind medin accumulation, as it is not yet known how MFG-E8 transforms into the amyloid, and the exact link between medins and pathology is not yet ascertained either. Considerably more research is required to determine how and why medin accumulates along with its exact effects on blood vessels.

The researchers of this study suggest that kinetic stabilizers, which are used in stopping the progression of transthyretin amyloidosis, may be of use in stopping the accumulation of amyloid. Time will tell if this approach is effective in ameliorating cardiovascular or cerebrovascular disease in humans, and such a therapy may one day be combined with therapies that remove 7-ketocholesterol and other, more well-known, causes of vascular dysfunction and failure.