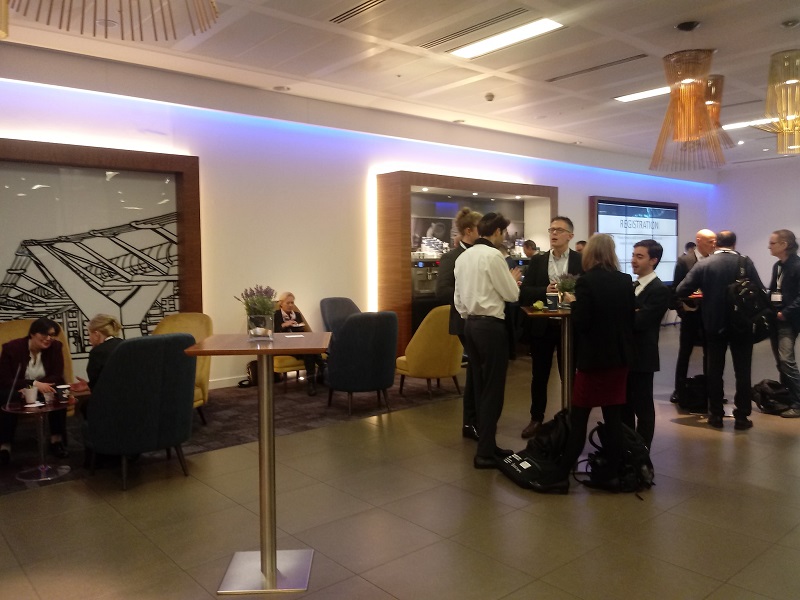 February 4th, 2019 saw the Longevity Leaders Conference hosted in Aldersgate, London. I was fortunate enough to have been invited to attend this interesting event, so I thought that today was the ideal time to share some experiences of the conference with you.

The conference was quite broad in scope and included people from the aging research community, the pharmaceutical industry, general healthcare, and the business and insurance fields. The book went on to talk about the changes coming to medicine and how people could soon be living longer than ever before thanks to the new medical approaches that are currently being developed.

This was somewhat reminiscent of the recent Barclays Bank “Beyond 100” report, a whitepaper that openly talks about how science is changing how we think about and treat aging and that society should prepare for healthy lives that last to 100 and beyond. While Barclays was not sponsoring this particular event, I wanted to include the video that it produced in collaboration with Dr. Aubrey de Grey and other scientists about aging research, as it echoed the sentiment of the Prudential booklet and the positive, future-focused angle that both companies are taking. When large companies take things like this seriously you know the tide has turned.

Dr. Aubrey de Grey was in fine form as usual during the keynote panel discussion at the start of the event, just as he was when, later that day, I had the opportunity to interview him about progress with SENS. While we will be publishing the interview I did with Aubrey later, it’s a good time to share the interesting concept of damage crosstalk now.

It turns out that Aubrey has become more optimistic about the medical control of age-related damage and has moved his prediction of longevity escape velocity down from 20 years to 18. Longevity escape velocity is, essentially, a hypothetical situation in which, due to the increasing pace of medical technology, life expectancy is being increased faster than the rate at which time passes. Every year, medical advances would be increasing life expectancy by more than the year in which they were brought to the clinic; in other words, we would have reached the point at which we are repairing damage faster than it is accruing, thereby preventing age-related diseases from killing us.

So, why has he shifted his prediction for when this may happen? Quite simply, there is increasing evidence that the different aging processes have a lot more influence and interaction with each other (crosstalk) than previously thought. One prime example of this crosstalk between the damages of aging involves the senescent cell therapies known as senolytics.

Not only have these therapies been shown to remove senescent cells and improve health and lifespan in mice, they also appear to influence other age-related damages, such as improving skin elasticity thought to be caused by crosslinks, reducing liver spots on the skin caused by insoluble waste building up in cells, and so on.

It was always clear that there is some level of interaction between different age-related damages, but Dr. de Grey suggests that this is more than previously thought, which is good news indeed because it means that fixing one damage type may offer a greater benefit. Therefore, he has advanced his prediction by two years.

After a morning coffee break, 11:30 saw the start of the Longevity Conference and Company Showcase, a section of the event that introduced the topic of aging research and some of the companies working in this space. Ichor Therapeutics, Cleara Biotech, Senolytic Therapeutics, and Repair Biotechnologies were the companies chosen to present, and we were given a great introduction into the field by Dr. Joao Pedro de Magalhaes from the University of Liverpool. Joao delivered the introduction in his usual fun and informative style, which included some amusing moments typical of his presentations and that served to break the ice with people are new to the topic. I have seen Joao present a few times, and it is always a pleasure to listen to him give a talk.

Joao talked about aging research and how databases like the fantastic HAGR that he developed can help inform us and guide researchers down the most promising paths towards health and longevity. Ichor Therapeutics was introduced by the charismatic CEO Kelsey Moody, who was once again true to form when delivering an interesting insight into the industry, the Ichor group of companies, and the philosophy and strategy that he employs in running a biotech company on the cutting edge of aging research.

Ichor is currently developing therapies that clear our cellular waste that builds up during aging and can cause blindness in older people. It also has a number of portfolio companies, each working on different aspects of aging.

I also interviewed Kelsey later that day, and I will soon discuss Ichor Therapeutics, its portfolio companies, and the story of how Kelsey came from being a high school athlete to the CEO of a biotech company focused on age-related diseases. Dr. Peter de Keizer presented for Cleara Biotech, a company working on senescent cell removal therapies that are based on blocking interactions between the FOXO protein and the P53 gene, which senescent cells rely on to avoid destruction. By disrupting this interaction, the unwanted cells can be encouraged to destroy themselves, thus reducing the inflammation that they cause. Dr. de Keizer explained how senolytics work and provided some exciting insights into progress at Cleara, which is developing more efficient versions of its early candidate drugs.

Senolytic Therapeutics, part of the Life Bioscience group of companies, was introduced by company CEO, Dr. Marc Ramis Castelltort. The company is developing therapies that target the senescent cells that accumulate with aging, a popular focus currently and the most promising near-term therapy against aging. Senolytics Therapeutics is currently developing senolytic therapies focused on combating fibrosis, a disease with a strong senescent cell element, as well as certain cancers. Last but not least was CEO Reason presenting for his company, Repair Biotechnologies. Reason has been a part of the aging research community for many years and is well known for running the website Fight Aging!, but he has recently launched a biotech company with partner Bill Cherman.

Repair Biotechnologies is focused on reversing atherosclerosis and atrophy of the thymus, and it is currently developing therapies to do exactly that by targeting the aging processes that underlie them. Reason will be speaking more about developments in this direction later this year at our conference in New York.

Lynne Cox, a biochemist from the University of Oxford, chaired a discussion panel with Brian Delaney, president of the Age Reversal Network and who serves on our Industry Advisory Board, and Tristan Edwards, the CEO of Life Biosciences Inc.

The discussion topics were “What’s at the cutting edge of Aging R&D?” and “How can we accelerate R&D and the advancement of new therapies to address aging and age-related disease?” The panel was in a round table format, and attendees were also able to directly join the discussion, which proved lively and interesting. Lynne Cox, in particular, provided some very informative details about aging research. There was considerable discussion about senescent cell clearing therapies as well as touching upon the topic of biohacking. The general feeling was that biohacking had the potential to set the field back if people conduct it in an unscientific manner and harm themselves in the process. Indeed, this echoes our sentiment that people who self-test at home should be very careful and apply a science-based approach to what they are doing.

The bottom line is that if you are not recording your biomarkers and doing things scientifically, you risk hurting yourself and are taking things on faith rather than evidence; this also has potential to harm the field and set research back, so please hack responsibly.

On a more positive note, the panel was in favor about science doing something about aging and age-related diseases, and discussion of senolytics, senomorphics (therapies that block senescent cell inflammation), and cellular reprogramming were all enthusiastically discussed, especially by the academics present. This is very welcome, and it was great to see so many academics being frank about the potential of medicine to bring aging under medical control in order to prevent age-related diseases, which is in stark contrast to a decade ago, when suggesting the idea could harm your career and get you mocked by your peers. Times have certainly changed, as more and more researchers are now focusing on how we can rise to the challenge that aging presents.

The conference was of very high quality, from the venue to the speakers, and it was a pleasure to attend the event. Hopefully, the Longevity Leaders Conference will return to London next year, and we look forward to having the opportunity to be there again in the future.