Ask the PEARL Team Anything!

The PEARL team answers your questions about its plans to conduct human trials with rapamycin. 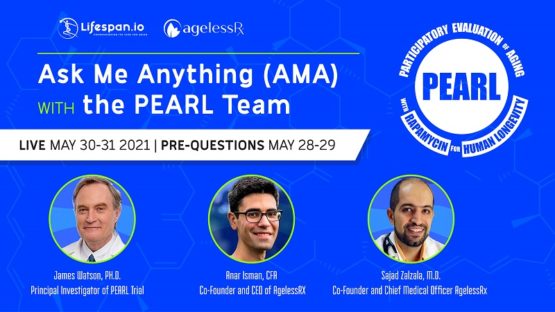 Today, we want to announce we are doing an AMA on Reddit Futurology! The Ask Me Anything thread will be open May 28 and 29 for pre-questions, and on May 30 and 31, the PEARL team will be answering questions.

This is your opportunity to ask questions about the project, which aims to launch human longevity trials with rapamycin.

Ok, but what is rapamycin?

Rapamycin is perhaps known best for its use as an immunosuppressant but has also been shown to extend the lifespan of multiple species in studies. It reliably increases lifespan in mice and with far better data than metformin, another frequently touted longevity drug.

Forget live fast, die young. Do the opposite!

Rapamycin appears to slow down metabolism in such a way that it increases lifespan, so unlike the popular phrase, it’s better to live slow, die old! It is thought to increase lifespan due to its influence on the mammalian target of rapamycin (mTOR), an important regulatory pathway for metabolism.

While rapamycin appears to trigger some of the same mTOR pathways associated with caloric restriction (CR), it is not simply a mimetic and has distinct targets in addition to the ones shared by CR.

While the data showing that it can reliably increase lifespan in various species has been published, the lack of human data focused on aging and longevity is lacking. This is where PEARL comes in, as this project seeks to launch meaningful human trials to see if the effects seen in other species translate to people.

Reducing the costs of human trials for longevity

Due to the nature of the PEARL project, particularly its crowdfunded aspects, it is possible to reduce the costs to make a rapamycin trial viable and within reach of our community. PEARL has already smashed its initial fundraising goal of $75,000 and is now into its stretch goals, which expand the scope of the project.

Public funding sources have shown little interest so far in investigating longevity interventions, so we can expect more projects like this to become the norm in the future, as our own community supports the drive to end age-related diseases. If we want the data showing that these things can work, then it seems that we as a community must fuel that progress with initiatives like PEARL.

Join us today for the AMA, and ask the PEARL team anything! We would like to thank the moderators over at Futurology, a subreddit devoted to the field of future studies and speculation about the development of humanity, technology, and civilization.