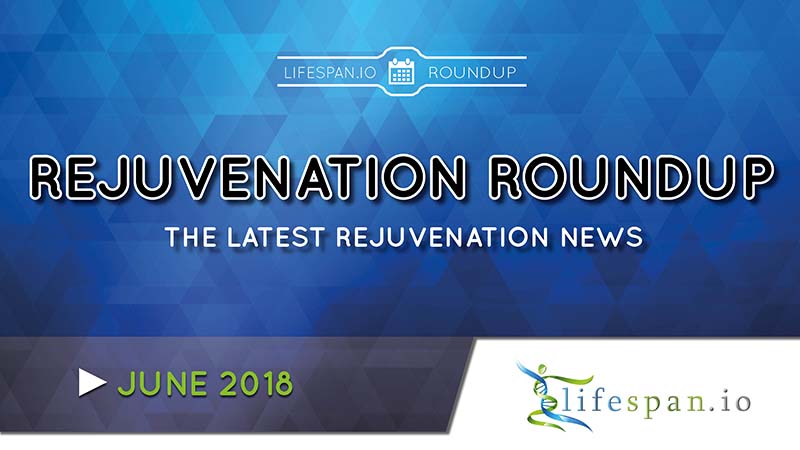 July is here, and our upcoming conference in New York City is only a handful of days away! If you haven’t done so already, go and get your ticket now so that you can enjoy the June roundup fully relaxed, knowing that your seat is secured.

About our NYC conference

On the off chance you’ve missed the news about it, Ending Age-Related Diseases: Investment Prospects & Advances in Research is our first conference to be held in New York City. It will take place on July 12th at Cooper Union, and it will feature talks and panels with several great speakers, such as Dr. Vera Gorbunova from Rochester University, Dr. Vadim Gladyshev from Harvard Medical School, Dr. Aubrey de Grey from SENS Research Foundation, Dr. Kelsey Moody from Ichor Therapeutics, and many more. You can get your ticket here, and remember that Lifespan Heroes get 75% off the ticket price!

On June 25, Unity Biotechnology has officially announced a human clinical trial of its new senolytic. This Phase 1 trial is aimed primarily at establishing the safety of UBX0101, which is to be directly injected into the knees of patients suffering from moderate to severe osteoarthritis; however, the study will also evaluate efficacy to some extent. This trial is designed to test UBX0101 for a specific age-related condition, so a successful result might pave the way for more advanced trials involving this particular condition and investigations into using it for other age-related conditions. Hopefully, one day, we will look back to June 25, 2018 as a milestone that marks the beginning of an era free from age-related diseases!

News from SRF and FH

As you probably know, SENS Research Foundation and Forever Healthy Foundation have long been a team in the fight against aging; last year, they inaugurated the Undoing Aging conference series, and given their great success in 2018, it is no surprise that next year’s conference has already been announced! UA2019 will be held in Berlin, Germany at the Umspannwerk Alexanderplatz on March 28-30. Tickets are already available, so you might want to book yours already and take advantage of the early-bird prices.

Speaking of Undoing Aging, videos from the 2018 edition keep rolling out; have a look at this one featuring the founder and CTO of Immusoft, Matthew Scholz.

Are you a subscriber to SRF’s newsletter? If not, you can see its June news on their website here, but do consider subscribing to its newsletter—and ours, too!

Ending Aging, Dr. Aubrey de Grey’s classic book, has been translated to many languages, but up until recently, not in Portuguese. This gap has now been filled thanks to the effort of Nicolas Chernavsky and Nina Torres Zanvettor, who recently released O fim do envelhecimento in electronic format. The book is available for purchase on Amazon here or here.

Aging is a topic that is discussed a lot by everyone every day. If you pay attention, you’ll see it pop up everywhere in most casual conversations, but rarely people talk about it in terms of the serious health problem it is; they tell themselves stories about aging to make it appear less bad than it is. This is something that we’re all exposed to from our childhood, and, unfortunately, it continues throughout our lives, to the point that, even at the institutional level, the true nature of aging—a chronic decline in body functionality—is nonchalantly swept under the rug and more fairy tales and oxymorons are told to the public instead. This is something we all need to be aware of, and work hard to change, if we want to get rid of age-related diseases rather than keep telling ourselves that they’re not that bad.

However you may look at it, exercise is good for you; that’s something that is repeated so often that even children know it. In particular, exercise may slow down the march of aging, even though not by much. In this article, Reason discusses and comments a paper about the impact of exercise on all of the Hallmarks of Aging.

Chronic obstructive pulmonary disease (COPD) is a disease of the lungs that may strike at any age, if you do the wrong things, such as smoking; however, aging lungs and lungs affected by COPD share enough similarity that COPD may be considered, to an extent, accelerated lung aging. FA! points out an interesting open-access paper on the subject.

Senescent cells, and the chronic inflammation they induce, are implicated in a lot of age-related ailments, including sarcopenia and frailty—which, in simpler terms, mean that your muscles are weaker and less dense, and your bones more fragile; consequently, your mobility is impaired, and your chances of falling and badly hurting yourself dramatically increase. Here’s some commentary by Reason on a recent review paper arguing for cellular senescence as a potential target for medical intervention.

The name Jim Mellon is probably familiar to our readers—he’s a famous investor with a deep interest in fostering the development of a rejuvenation biotechnology industry, and he co-authored Juvenescence, which we reviewed here. Recently, his investment company Juvenescence Limited raised $50 million dollars in a Series A financing round, which will be invested in a portfolio of biotech ventures that are paving the way to a world where age-related conditions are effectively treated rather than simply tolerated. It’s great to see more capital brought into this industry, as this will likely speed up its growth significantly.

Pirfenidone, a drug approved for use in humans to treat lung conditions, appears to reduce inflammation and thus further injury in the heart following a heart attack—at least in mice. Apparently, the drug works by regulating immune response—specifically, that of B lymphocytes—though not all details are clear yet, and work needs to be done to figure them out and reduce side effects.

Cancer is a very resourceful enemy, capable of adapting to anything you might throw at it; recently, researchers have found out that cellular cilia—tubular organelles located on cells’ surfaces—might be partly responsible for this deadly talent. Longer cilia on cancer cells seem to confer them better drug resistance, whereas their absence appears to make them vulnerable again. You can read more about it here.

Rejuvenation-related research projects are many and varied, and keeping track of them may seem like a daunting task. Fear not, we can help you with that: as announced earlier this month, our Rejuvenation Roadmap is out! This database of ongoing research projects is categorized according to the Hallmarks of Aging and provides details as to who’s working on each project, what exactly is being researched, and at what stage of development it is. The roadmap is still in its infancy, and there’s a lot to be added yet, so keep an eye on it!

You might remember our article about a recent paper on how the nuclear membranes within our cells become misshapen with age and the deleterious effects this has; this very same topic was the subject of our latest Journal Club. Check out the video if you are interested in the details.

This month, we had another great round of interviews where Dr. Vadim Gladyshev discussed theories of aging and his research on redox biology, Dr. Anthony Atala talked about regenerative medicine, and finally, Dr. Michael Fossel granted us a two-part interview (here and here) on epigenetics, telomeres, gene therapy, and more!

It’s been another great month for the whole field, and we hope to create even more momentum with our upcoming conference. We’d like to see you there!