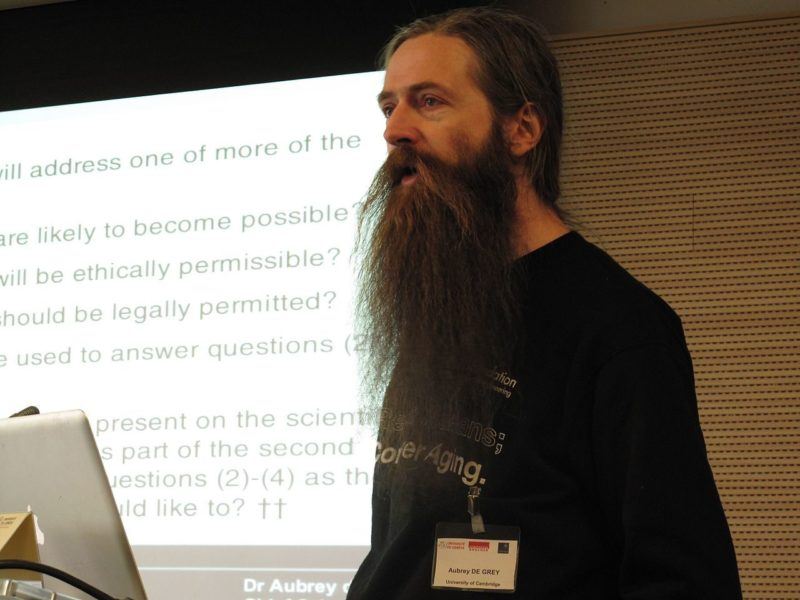 The latest of the regular “commentary on some recent theses” publications by Dr. Aubrey de Grey and collaborators has been released today. As is usual in these pieces, there is commentary on a variety of recent research topics, including the cellular senescence of astrocytes in the brain, which may lead to new therapies to combat neurodegenerative diseases.

Of the seven strands of the SENS platform, the ablation of senescent cells (ApoptoSENS) has thus far made the most progress towards the clinic; drugs that selectively eliminate these toxic and superfluous cells are referred to as senolytics, and several are now undergoing or are soon to enter clinical trials. Recent evidence from preclinical work has indicated that the role of senescent cells in the aging process is remarkably significant, such that resolving this single form of damage yields dramatic benefits across the spectrum of age-related decline–simultaneously extending both lifespan and healthspan in mouse models.

Although the existence of a true senescent phenotype in postmitotic cells such as neurons is still unproven, its existence in their crucial support cells, the astrocytes, has been recognized since the beginning of this decade. Based on work done in the world-leading lab of SENS Research Foundation advisory board member Judith Campisi, this dissertation makes vital progress towards proving the clinical relevance of the phenomenon–laying the groundwork for the translational application of senolytics to major neurodegenerative diseases. Glutamate (together with aspartate) is the major excitatory neurotransmitter in the human brain, and dysfunctions of its handling are clearly associated with both acute and chronic neurological conditions.

That such dysfunction is here shown to be an intrinsic consequence of physiologically realistic levels of astrocyte senescence leaves little doubt that a mechanistic connection must exist. In Alzheimer’s disease specifically, it is notable that the loss of glutamate receptors in postmortem samples tracks both the brain’s major excitatory pathways and also the very well-established progressive staging of the disease. These results are good news indeed! Replacing intrinsically aged neurons without disrupting synaptic connectivity has always been accepted to be a daunting task, but astrocyte turnover–while low in healthy tissue–is a routine process following injury (albeit one that has side effects of its own when driven to excess in the context of chronic inflammation, although these appear somewhat treatable).

Thus, depleting senescent astrocytes and so neutralizing their inflammatory effects may well automatically induce their replacement by healthy new cells; and even if not, stimulating that process is not an insurmountable challenge. At the very least, such a therapy should prevent further degeneration–and perhaps even create the conditions for the repair of pre-existing neuronal decline as well, especially since a subset of those astrocytes may be able to function as neural stem cells.

The topic of using stem cell-engineered invariant natural killer T cells as a cancer immunotherapy may also be of potential interest to readers.

Invariant natural killer T cells are a rare subset of T cells defined by expression of the NK cell-associated marker NK1.1 and a heavily restricted molecular specificity (hence “invariant”) dependent on CD1d, a nonclassical MHC protein which solely displays glycolipid antigens. Despite their low abundance, iNKT cells are now known to play a critical role in the body’s defence thanks to their very rapid activation in response to threats and their potent capacity to stimulate other classes of immune cells. In the context of cancer, iNKT cells have particular promise precisely because their function is largely agnostic to the specific antigens present–thus rendering immunoevasion less of a barrier to therapeutic efficacy–and because they are especially sensitive to the presence of the proinflammatory cytokines found ubiquitously in tumour stroma, which in sufficient concentrations can trigger a robust iNKT response absent any antigen-specific engagement at all. Indeed, it is notable that depletion of this population has been shown to promote the development of a range of tumours.

Caution is certainly still required; the function of iNKT cells is far from wholly understood, and their dysfunction is also associated with autoimmune disease (although in this case the direction of causality remains unclear). Still, the solution proposed in this dissertation to the major problem with the clinical translation–their very limited availability–is both ingenious and flexible. Since iNKT cells are relatively short lived, and since the source HSCs could in principle be engineered to produce them not constitutively but rather in response to a bio-orthogonal stimulus, the exact magnitude of treatment can be left under physician control–greatly limiting the risk of hazardous side effects even in patients with comorbid inflammatory conditions. Meanwhile, the progress described here in preparing HSCs capable of supplying an indefinite source of highly specific progeny has obvious and substantial implications for other forms of cell therapy.

It is worth your time to read the entire commentary, as Benjamin Zealley and Aubrey de Grey provide some great insights into current research and how it might be used to combat age-related diseases. Late-Life Treatment Extends Nematode Lifespan by Two-Fold
0 Comments
Scientists have managed to extend the lifespan of C. elegans nematode worms by as much as 135% by blocking an insulin-related pathway very late in life [1]. The long-lived mutants Back in the […]
Posted in: News
Tags: C. elegans, CRISPR, Daf-2, IGF-1

Narrowed Neck Arteries Lead to Reduced Blood Flow in Eyes
0 Comments
Researchers publishing in GeroScience have found that carotid artery stenosis, a consequence of hypertension, is linked to a lack of blood flow in the eyes. A disease that restricts blood flow to the […]
Posted in: News
Tags: Carotid Artery Stenosis, Hypertension, Stroke