What's the difference between scheduled murder and dying of aging? 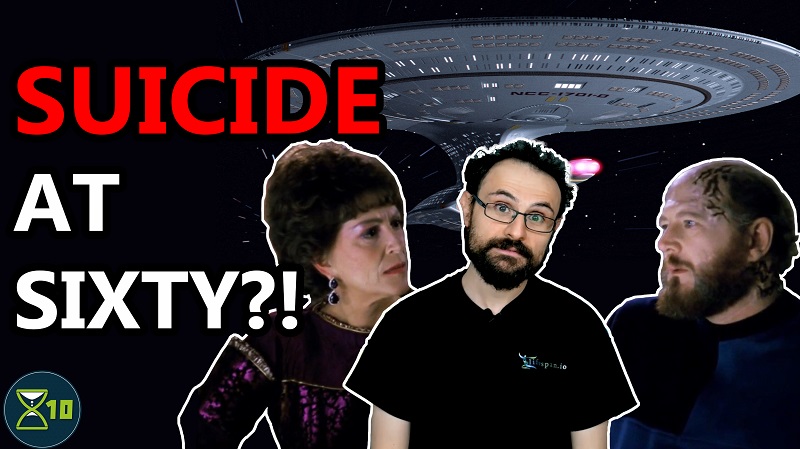 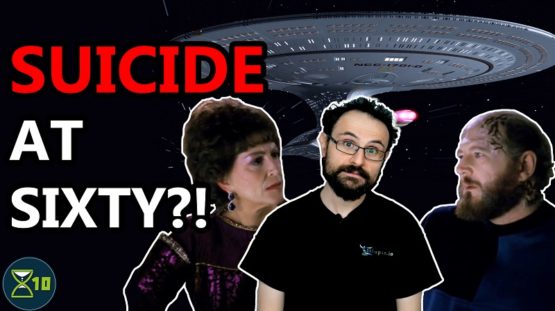 Star Trek had quite a lot of episodes on future societies and ethics, and today, Nicola focuses on one that is particularly poignant for our industry.

I’ve been a Star Trek fan for more than twenty years now. Aside from all the geeky and nerdy stuff, what I love about it is that it’s essentially a future-positive series. In Star Trek, humanity is not doomed to succumb to its own mistakes, unlike what many people think will happen; rather, it becomes part of a vast, peaceful interplanetary alliance that’s constantly working to improve itself. Humans in Star Trek still got their problems to solve, but the point is, the overall message that Star Trek aims to convey is that humanity is far from hopeless, and its future may be bright.

I don’t always agree with the moral teachings of every episode, and on rare occasions, my opinion was the exact opposite—I’m looking at you, Picard finale—but there’s a particular episode of Star Trek: The Next Generation that struck me. The episode was titled Half a Life, and it was about a scientist who was supposed to kill himself because his people thought his time had come.

Welcome to X10, your one-stop YouTube show for all things life extension. Is this your first time here? If so, consider subscribing to our channel, and if you do, click the little bell icon and then select “all notifications” so that YouTube will let you know whenever we release a new episode.

If you haven’t watched the Star Trek episode I was talking about, the abridged version is that Timicin, a scientist from a planet whose sun is dying, is aboard the Enterprise to carry out experiments to see if reviving dying stars is possible. During his stay, he meets Lwaxana Troi, the visiting mother of the ship counselor.

Both Timicin and Lwaxana are widowed and well into their middle age; they both like each other, but there’s a problem. Timicin will turn sixty in a few days, and that’s the age when people of his world are expected to kill themselves in a sort of pre-emptive euthanasia called the “Resolution”. The rationale behind the Resolution is to prevent older people from becoming a burden on younger generations and spare them the suffering of losing their health as they age.

According to Timicin, the practice of Resolution wasn’t always a thing and was instituted several centuries before the events of the episode. Before then, when people on his planet got too old and nobody could look after them, they’d be put in deathwatch facilities where they waited for death to come while their health failed them more and more. Eventually, the people of the planet came to the conclusion that the Resolution was a more humane option.

Lwaxana is horrified at the thought that Timicin must die for no good reason; she argues that younger generations have a duty to assist the elderly and that you can’t get rid of the problem by getting rid of the people. Timicin isn’t crazy about dying either, especially because he thinks he’s close to reviving his home planet’s dying sun, but says he accepts the longstanding tradition of his planet.

Eventually, Lwaxana manages to persuade him to rebel against this tradition, but this attempt leads to a diplomatic incident that risks escalating into conflict, because Timicin’s people are very strict about their tradition. Timicin gives up, and both he and Lwaxana disembark to his planet, where she will attend his Resolution.

This episode was quite clearly about the importance of taking care of the elderly, but I think a lot of what was said to make that case can be said to make a case for life extension instead.

At the moment, aging is not under our control, and we can’t prevent it from killing anyone. However, even if we could, not everybody agrees we should, and that’s where these two situations become almost the same: in both cases, we’re talking about preventable deaths that are not prevented because, for whatever reason, somebody thinks they shouldn’t be.

There is a difference: Timicin’s death is supposed to happen by his own hand. His people actively promote elderly suicide and basically force people to comply, so Timicin’s death and the ritual deaths of all the other elderly of the planet result from somebody’s direct action. In our case, if people kept dying of aging because we refused to create therapies to treat it, all the resulting deaths would not be consequences of a direct action but rather of a failure to act.

We could sit all day and debate if causing death by inaction is less morally despicable than by action, but let’s not forget that crime of omission is a thing—it’s the crime you commit when you fail to do something you were legally supposed to do, like casually passing by someone on the street who is in clear need of medical help and doing nothing.

This is not to say that not creating life extension therapies, or advocating against them, is a criminal offence, because it isn’t, but it does mean that harming others through inaction is, in some jurisdictions and some cases, considered bad enough to deserve criminalization.

Being against life extension may not be as bad as forcing people to commit suicide, but it still is the same as saying that people who are old “enough” shouldn’t be saved even if they could be and even if we could give them back the health they had when they were young. That’s ageism.

Listen again to this bit by Lwaxana: “Because his society has decided that he’s too old, so they just dispose of him as though his life no longer had value or meaning.”

In my opinion, this is exactly the hidden meaning of clichés like “the old must make room for the young.” Common “wisdom” would have it that here is some vaguely defined age when you’ve had your time and your existence is no longer as meaningful or important as that of somebody younger. It sounds harsh, and mean, and cruel, and it is, and that’s precisely why, I think, we hide it behind idealized and romanticized figures of speech like “walking into the sunset” or “passing on the torch.”

To be fair, again, unlike Timicin’s people, we don’t kill old people; aging does. But dismissing life extension with set phrases on the necessity of replacing the old with the new is justifying the killer. We don’t dispose of people when we think they’re too old, but we let aging do it for us. We didn’t really have a choice thus far, and technically we still don’t, but now we know that science may be able to give us one. If we refused to take it, we would become “accomplices” of aging.

Later in the episode, Timicin and Lwaxana have a very interesting conversation which in some ways is absolutely maddening. On the one hand, you have Timicin explaining how the Resolution allows elderly people to end their lives with dignity and relieves young people of the burden of caring for them, and on the other you have Lwaxana saying that that’s just plain cruel and that caring of the elderly is a responsibility.

Neither of them seems to see a third option. It’s either the elderly kill themselves before they get too sick, or somebody assists them while their health deteriorates to death. It’s tempting to think that the immutability of aging is so hardwired in us that the script authors didn’t even imagine that rejuvenation might be an option, but that’s just not true: there’s plenty of Star Trek episodes where youth pills and age-reversal techniques were casually stumbled upon and then casually forgotten.

It’s also tempting to think that this is just the effect of a sort of Stockholm syndrome that made us fall in love with our abuser, so the authors are strong advocates of saving elderly lives only as long as they don’t “naturally” come to an end. Maybe there’s some of that, but this episode was likely meant to discuss our present-day issue of the care of the elderly, and a youth pill wouldn’t help do that.

The conversation ends with them talking about Timicin’s work. He’s close to finding a way to revive the sun, but what will happen now that he’s supposed to die? Timicin replies that younger scientists will continue his work, but Lwaxana reminds him that his planet has only a few decades left, and the younger scientists might fail.

This is what life extension advocates say all the time: rejuvenation could allow humanity to benefit from the ever-growing wisdom and experience of our greatest minds for a really long time. And what’s the typical comeback to that? “But what about tyrants living forever?!” Sigh.

Shortly before the end of the episode, Timicin’s daughter Dara comes on board to try to persuade him to go home and go through with the Resolution. You can tell this is fiction when you hear her say that she’s not concerned with his work as much as she is with him: his work is over, now it’s time for him to rest. Sure, their sun will blow up soon and kill everybody, and he might be able to prevent it, but these are just details. All that matters is that he kills himself like any good 60-year-old citizen.

Still, pay attention to the metaphor used by Dara: “It is time for you to rest.”

In other words, it’s time for you to die, to which Lwaxana replies: “Perhaps you will feel differently as you get a little older, say approaching sixty.”

I doubt anyone would disagree with Lwaxana, but only because we’re all accustomed to the idea of living past 60. The current global life expectancy is over 70, and in developed countries, it’s over 80.

Sixty seems early to die, but 80 or 90 doesn’t because we’re used to it. I’m pretty sure quite many of those who agree with Lwaxana that 60 is early would say that 80 or 90 is a good time to “rest”, especially because at that age you’re generally more “tired”, and by tired I mean sick. But say that rejuvenation existed, and that you wouldn’t be “tired” at 80, 90, or any other age. Would 80 or 90 still be a good time to “rest”? Let me know in the comments below.

Thanks a bunch for sticking to the end of this X10 episode. If you liked it, let me and the rest of the team know with a like, a share, or a comment, and if you haven’t done so yet, subscribe! We make videos on the science and philosophy of life extension, as well as news and more. If you do subscribe, don’t forget to click the little bell icon and select “all notifications” to stay in the loop.

If you want to go the extra mile to help, head over to lifespan.io/hero and become a supporter! Your donations will help us grow and produce more content, and they will also help our parent organization, Lifespan.io, in its mission to speed up the development of therapies against aging.

Metformin is Linked to Weaker Exercise Improvements
0 Comments
A study published in Obesity suggests that metformin may decrease the gains in cardiorespiratory performance brought on by exercise. The world’s […]
Posted in: Exercise, News
Tags: Metabolic Syndrome, Metformin