LifeXtenShow – What Is Life Extension? Today, we’re releasing the first episode of X10, and for this Life Extension 101 episode, we’re going to start with the most fundamental thing about life extension: its basic definition. In this week’s informative episode, Nicola explains what this often-misused term really means and what it implies. While defining this important concept, he discusses rejuvenation and how it differs from traditional geriatrics and the compression of morbidity.

Life extension is not what you probably think it is.

If you’re new to the topic of life extension, you might be a little put off by it; the term “life extension” itself is a bit of an unfortunate choice of words, because it often gives people the wrong idea about what it is actually meant. Does it mean trying to “stretch” life beyond its alleged boundaries, or does it mean to prolong the decrepitude of old age until you’re a very sick 150-year-old?

It actually means neither. To understand what life extension really is, consider that your overall health is probably going to look and feel approximately like this: The colored curve represents the whole of your lifespan—the duration of your life from birth to death. The length of the curve is your age, and its height measures your health. When you’re born, the curve is as tall as it can be, because you’re very healthy; around age 65, your health is worse than before, so the curve is lower there, and it’s getting steeper because your health is getting worse more quickly; when the curve reaches the bottom, you’re ill enough to be dead—nowadays, this generally happens in your 80s or later.

The green-yellow part of the curve is called your healthspan—the portion of your life that you spend in good health; the orange-red part is where you have morbidity, the time when you become more and more likely to suffer from multiple, chronic age-related diseases.

The current medical paradigm is not to bother intervening before anything goes visibly wrong—that is, when you step into the orange zone and start getting the diseases of aging—and when this does happen, what doctors will be able to do in most cases is simply help you manage the symptoms rather than address the causes of your disease; for example, if you suffer from high blood pressure, you might be prescribed pills that help lower it for as long as you take them, but they don’t eliminate what’s causing your pressure to go up. This will make you feel better, and it might delay serious complications down the line, such as a heart attack, which means that the slope of the curve will become a little less steep past the point of geriatric intervention, causing age-related diseases to kill you a little bit later than they otherwise would. In other words, you’re going to be a little bit less sick, but for a longer time, and that’s precisely what scares people off when they think about life extension—except this is not life extension; this is how we currently deal with age-related diseases.

Since nobody likes being sick, let alone for a long time, a possible option that has interested researchers for a few decades is compression of morbidity. Hypothesized by Professor James Fries in a 1980 paper, compression of morbidity relies on the assumption that the onset of age-related morbidity can be delayed through medical interventions, thereby extending healthspan, but with no or modest gains in lifespan.

This means that the curve would be pulled up somewhat during the last decades of your life, making it more square-looking—which is why this is also called “squaring the curve”—squeezing the orange and red sections to the right, which represents less time spent in poor health. 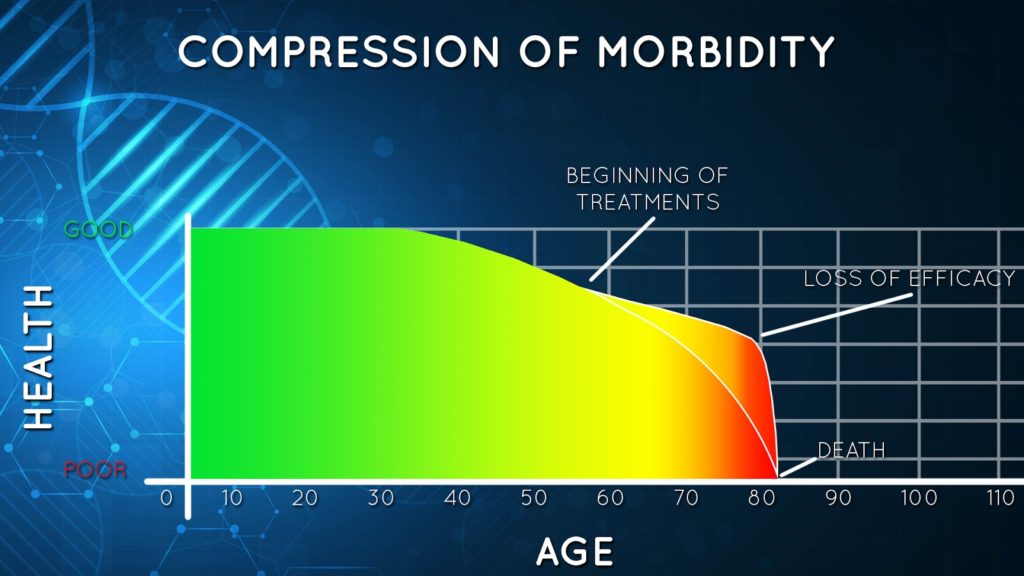 If compression of morbidity could be attained, we would still get age-related diseases like we do now, except later, and we would still die more or less at the same age, because once you hit morbidity, your health would go downhill faster.

Whether a shorter, faster race towards death is better than a longer, slower one is a matter of personal taste, but on one thing we can all agree: being fully healthy for however long you live is better than being sick for any length of time, and this is what life extension is about.

Despite claims that the length of human lifespan might be somehow hard-coded in our genes and that, once you’re around a certain age, you drop dead for no apparent reason no matter how healthy you are, there’s no evidence for such a thing;

what there is plenty of evidence for is that, as you age, your body accumulates different types of damage, known as the hallmarks of aging, which, over time, increase your likelihood of dying. As long as you’re in the green zone, the ravages of aging are negligible enough that no pathologies manifest—this is known as subclinical aging.

Up to this point, the damage is simply too small to cause trouble, and it can be dealt with by the built-in repair mechanisms of your body; beyond subclinical aging, the damage becomes too much for your body to cope with, and that’s when age-related diseases begin to set up shop.

As time goes by, the damage becomes more and more extensive, and your health deteriorates more and more, slowly increasing your risk of getting a fatal condition, until your likelihood of dying hits 100% and—well, you die.

Over the past decade, evidence has been piling up that we might be able to repair the damage that accumulates in our bodies over time by employing biotechnologies that are designed to target each different type of damage.

The types of damage and how we could fix them are topics for a bunch of other videos, but senolytics, drugs that target a specific type of age-related damage, have produced impressive results in several studies in mice, delaying or improving a vast array of age-related conditions, in some cases extending their median lifespan up to 30%, which means they lived healthier for longer.

Of course, the old rule always applies—mice are not people—and that’s why senolytics are currently being tested on humans by a company called UNITY Biotechnology, specifically in patients suffering from osteoarthritis;

if things go well, senolytics might then be tested on larger cohorts of human patients for multiple conditions, and UNITY is only one of the many companies working on their own senolytic approaches.

Senolytics and other drugs that repair age-related damage effectively undo what aging does to your body, restoring it to a younger biological state, which is why they’re commonly referred to as rejuvenation biotechnologies. For example, you could administer rejuvenation biotechnologies to a 75-year-old person, reducing the overall damage to what you’d expect to see in a typical 60-year-old.

You can think of this as a sudden spike in our curve model to increase its height at age 75 up to the same level as it was at age 60. The actual numbers depend on the effectiveness of the treatments; ideally, they would restore your health back to young-adult levels. 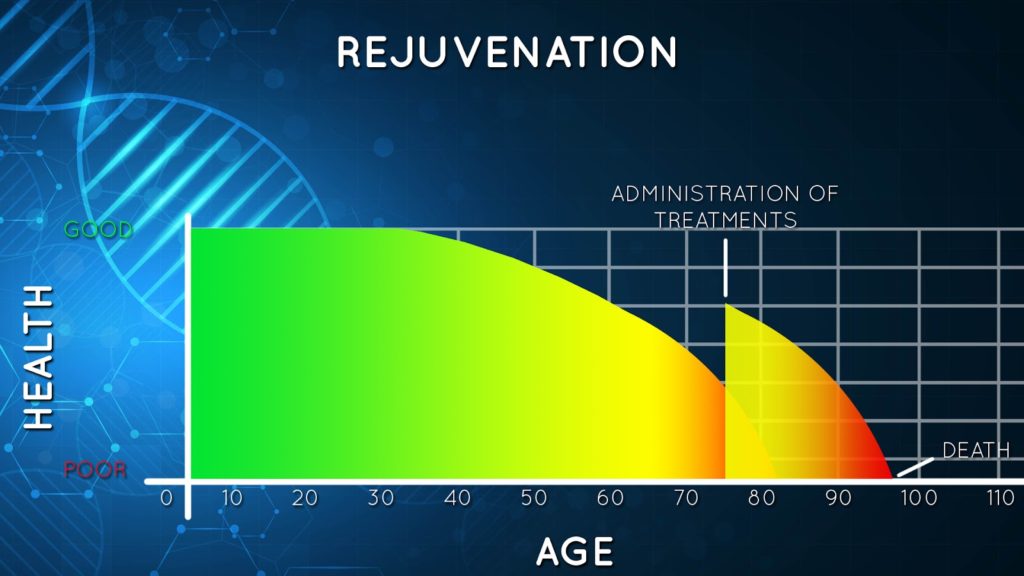 However, the way they’re conceived right now, most rejuvenation biotechnologies should fix age-related damage, but they won’t prevent it from accumulating again;

This means that, to escape age-related diseases indefinitely, a full suite of rejuvenation therapies would need to be reapplied periodically.

Sufficiently comprehensive therapies that are reapplied as needed could keep people indefinitely young, biologically speaking, irrespective of their chronological age; you could be 150 years old chronologically but 25 biologically—which, incidentally, also means you wouldn’t be any more likely to die any time soon than a typical “real” 25-year-old.

This is where the concept of indefinite life extension comes from; in this scenario, your health wouldn’t decline with time and you could be as healthy as a typical young person for an indefinite amount of time, and consequently, you could live for as long as other causes of death didn’t manage to catch up with you.

Now, some people call life extension “immortality”, whereas we prefer not to—mainly because they’re not the same thing. Most commonly, that word means that you can’t die of any cause whatsoever, which isn’t something that medical research has to offer. Life extension doesn’t turn you into the Highlander; even if your head doesn’t get chopped off, you will still be vulnerable to causes of death other than age-related diseases.

But even if life extension doesn’t make you technically immortal, could you live forever as a mortal being, all the way to whatever fate is in store for the universe? The answer is—maybe.

With aging out of the picture, human lifespan is bound to go up, potentially by a lot; given the current probabilities of death from other causes, some estimates say that we could live an average of 9000 years if our society were to stay the same as it is now, which it obviously won’t.

However, this depends not only on the effectiveness of rejuvenation therapies but also on whether you’ll be able to avoid everything else out there that might kill you.

We don’t think there’s anything inherently wrong with living forever, or wanting to—I would personally love it—but despite its name, life extension isn’t about how long you’ll live; it’s about making sure that all people can be always as healthy as young people regardless of their actual age. Extremely extended lifespans are very much welcome, but they’re just the logical consequence of being healthy.

Thank you for watching this episode of LifeXtenShow LE 101, and a special thank you to the Lifespan Heroes—our generous supporters whose contributions keep our boat afloat, allowing us to run this show as well as our blog and our crowdfunding and advocacy activities, and, more generally, help hasten the defeat of aging. If you’d like to become a Lifespan Hero yourself, head over to lifespan.io/hero.