Billionaire Entrepreneur Says Longevity Is the Next ‘Money Fountain’ Many readers already know about billionaire entrepreneur Jim Mellon and his interest in rejuvenation biotechnology. For those who do not, we would like to introduce you to him and his exciting work.

Jim Mellon is an entrepreneur and investor with interests in several sectors. He holds a Master’s degree from Oxford in Politics, Philosophy, and Economics. From the mid 1980s, he worked as a fund manager in Asia and later in the United States until founding his own company in 1991. Jim is the co-chairman of Regent Pacific Group Limited, chairman of Manx Financial Group plc, chairman of Plethora Solutions Holdings plc, and chairman of Port Erin Biopharma Investments Limited. He is also a non-executive director of Charlemagne Capital Limited, Condor Gold plc, and West African Minerals Corporation and 3Legs Resources plc, and he is a director of Portage Biotech Inc. Jim has been in the top 10% in the Sunday Times Rich List for several years and is the chairman of FastForward Innovations.

He is the chairman of his private company, Burnbrae Group Limited, which has significant investments in the life sciences, financial services, computer reselling, e-gaming, and leisure sectors. Jim spends considerable time evaluating different startup ideas and providing professional advice to people willing to invest in the most promising areas.

He is also the co-author of four books: Wake Up!, The Top 10 Investments for the Next Ten Years, Fast Forward, and Cracking the Code. His latest book, Juvenescence, is about biotech investment and the coming biopharma revolution.

Jim founded Mann Bioinvest in 2012, a company which invests exclusively in the life science sector and is very focused on the field of rejuvenation biotechnology.

“We believe that over the coming decade, the life science sector will be leading one of the most meaningful periods of scientific discovery and advancement. This period of development has been underpinned by two seminal moments – the discovery of the structure of DNA and the sequencing of the human genome; the latter occurring nearly 50 years after the former. Subsequent breakthroughs stemming from the discovery of DNA will give new hope to people with certain diseases who relatively recently would have had none. These breakthroughs are coinciding with a period in which the world’s population is undergoing the most ubiquitous and rapid aging in its history. This, we believe, will lead to the life science sector gaining new prominence and that the biggest successes in the sector will ultimately dwarf the likes of Apple, Exxon and BHP that are the current colossi of the stock market.“ – Mann Bioinvest

In April 2017, Jim invested in Insilico Medicine, which is pursuing A.I. assisted drug discovery in cancer, Parkinson’s, Alzheimer’s, sarcopenia, and ‘geroprotectors’, compounds that may slow down the aging process. The investment will be directed into using deep learning to create multi-modal biomarkers of human aging.

This short video gives you some insight into Jim’s interest in biopharma and some of his motivations for developing better drugs and therapies. 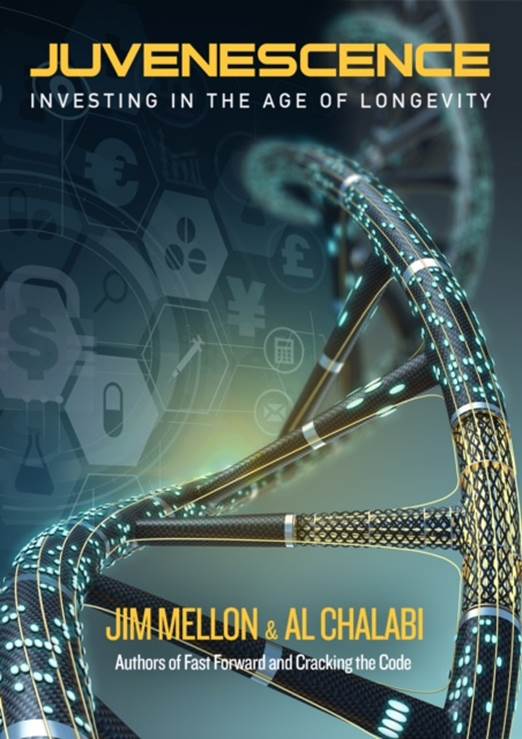 Jim predicts that rejuvenation biotechnology will be the next mega-industry. He will shortly be releasing a new book co-authored with Al Chalabi and entitled Juvenescence. The book will be a hitchhiker’s guide to longevity, showing the reader on how to benefit from life-extending technologies both personally and professionally. It will also be delving into the science behind rejuvenation biotechnology, presenting it in an accessible and easy-to-read way.

One of the great things about Jim is that, unlike many wealthy business people who rely on personal advisors to support their investment in biotechnology, he has spent a substantial amount of time familiarizing himself with recent developments in biogerontology. During the creation of the book, Jim spent many months on the road, meeting thought leaders in the field and learning about the latest developments. Therefore, he is well informed about progress in the field and ideally placed to make wise investments in biotechnology – and advise other investors.

Relying on his uncanny ability to identify global trends, he describes longevity as the next ‘money fountain’ and has been encouraging investment in the rejuvenation biotechnology sector. He recently gave this inspiring talk at the 2017 Master Investor Show.

It is extremely positive news to see people like Jim recognize the opportunity that rejuvenation biotechnology presents and actively advocate for its development. Solving age-related diseases takes effort from all areas of the community, so we are very pleased to see investment experts like Jim supporting the field not only with funding but also by writing books and encouraging others to become as enthusiastic about the field as he obviously is.

Juvenescence is expected to be published in the next few weeks, and we will be reviewing the book in depth. Late-Life Treatment Extends Nematode Lifespan by Two-Fold
0 Comments
Scientists have managed to extend the lifespan of C. elegans nematode worms by as much as 135% by blocking an insulin-related pathway very late in life [1]. The long-lived […]
Posted in: News
Tags: C. elegans, CRISPR, Daf-2, IGF-1

Gitcoin Launches Crypto Funding Round for Longevity
0 Comments
Gitcoin is a platform dedicated to supporting the development of open-source Web3 software – decentralized architecture based upon blockchain technology – and the funding of  “public goods” projects that are intended […]
Posted in: News
Tags: Cryptocurrency, Ethereum, Funding, Fundraising, Gitcoin

Narrowed Neck Arteries Lead to Reduced Blood Flow in Eyes
0 Comments
Researchers publishing in GeroScience have found that carotid artery stenosis, a consequence of hypertension, is linked to a lack of blood flow in the eyes. A disease that restricts blood flow to […]
Posted in: News
Tags: Carotid Artery Stenosis, Hypertension, Stroke