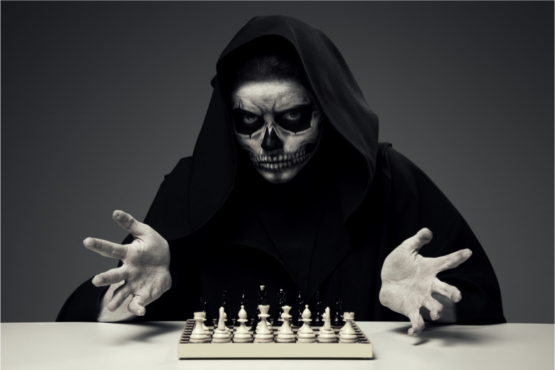 (Death is in the “cryonics patients” section of his collection, a temporary exhibition, in the company of a young woman. They are sitting at a chess table, surrounded by the frozen display cases of the rest of the patients.)

— That was a real nasty move, Miss Colomar.

— I wasn’t talking about the game—I meant your choice to become a cryopatient.

— (Smiles sarcastically.) I was talking about the game of life.

— (Laughs out loud.) And then they ask me why I keep bringing everybody down here with me. You living creatures are an amazing company—some of you are, anyway.

— Can’t say the same about you, I am afraid.

— The truth often does.

— We are drinking fine tea. We are playing a nice game of chess. We are enjoying a good conversation. What is so terrible about me as a host?

— The fact that you took me against my will, stuck me into a showcase, and take me out at your leisure to kill some time?

— (Smirks.) I do have a case ready for time, but I’m not quite killing it just yet. The universe has to be here first.

— You know what I mean. I had better things planned than playing chess against an abstraction with delusions of grandeur.

— And that is why you chose to give cryonics a shot, I suppose, once your battle against cancer became hopeless.

— How perceptive of you.

— I don’t think you give me enough credit, Miss Colomar. Like most of your kind, you fail to see my good sides—though I do understand your point of view.

— Am I not the great equalizer, Miss Colomar? Do I not make everyone equal in a disproportionately unequal world?

— Talk about a cold comfort.

— (Stifling a chuckle.) Says the one who took a dip in liquid nitrogen in the hope of eventually escaping me.

— It’s certainly given me better chances than if I were tucked away in a box or burned to ashes.

— If your kind can figure out how to beat cancer and how to thaw you without sending you right back here in the process, anyway.

— (Moves a piece, staring back at her undeterred.) I answered your question though, didn’t I, Miss Colomar? About my good sides.

— The “great equalizer”? Give me a break. Pseudo-intellectual sugarcoating for spiteful people with a passion for schadenfreude.

— I can’t stand people who find comfort in the knowledge that their same misfortune will afflict others too. There is no use in all of us being equally doomed to end up as pieces for your perverted collection.

— (Shakes head.) Your world is full of envy, Miss Colomar. Don’t you find that the fact that everybody dies removes the potential for more envy? If your kind really figured out a way to escape me indefinitely, don’t you think this would end up being a privilege for a few? How would the rest of you like that, Miss Colomar?

— That’s like saying everybody should be sick for the sake of avoiding a potential situation in which only a few people are healthy. That’s madness.

— Think about your own procedure, Miss Colomar. It’s not like everybody can easily afford cryonics at this time.

— I suppose it makes you glad that not too many people have a chance to escape your clutches.

— Oh, no, Miss Colomar. I enjoy previewing a new piece of my collection, and the uncertainty as to whether I will retain it adds flavor to the challenge. I am a good sport.

— For your information, I crowdfunded my own cryopreservation. People are kinder than you think.

— I’m sure, but my point stays. Indefinite life extension has the potential to be the greatest inequality of all. Some people get to live as long as they like, while others have no choice but to join my collection. A lot of people see it this way—I have my sources.

— Which only betrays the hypocrisy of people who say that indefinite lifespans wouldn’t be good to have. If this were true, then there wouldn’t be a problem if only some people were to have them.

— I concede you this point. Whether an indefinite lifespan would or wouldn’t be good for you, most people do want it for themselves, even if they say they don’t. They are lying to themselves to banish me from their minds, I think—see the humiliation I have to bear with? (Chuckles.) Will you now concede that indefinite life extension would only cause further inequality in your world?

— So what? Anything can be unequally distributed and lead to imbalance; anything can be abused and misused. Removing, or even not creating, something with that potential would mean a world with nothing useful or good in it—which would be as equal as a world gets.

— Are you going to dump all this nice rhetoric on all the people who might be left out from life extension? How’s that going to change the fact that they’re still “less equal” than others?

— Like with many other things, the truly beneficial way to make them more equal is to make life extension available to them. It doesn’t benefit anyone when we try to make the world more equal by eliminating everything that’s unequally available.

— (Moves a piece.) Yes, that’s very inspiring and all, but we both know that’s not how humanity runs the ship. Anyone in charge will do what benefits themselves, in spite of your nice rhetoric; humans are rather evil deep inside, Miss Colomar, and maybe I am what they all ultimately deserved, after all.

— Who’s dumping rhetoric now? That’s straight out of the self-flagellation handbook for smart alecks, and you know it perfectly well. (Checkmates him.) Play chess, not dumb.

— (Smirks.) You are a better player than I thought, Miss Colomar. Which is only good—I often have it all too easy.