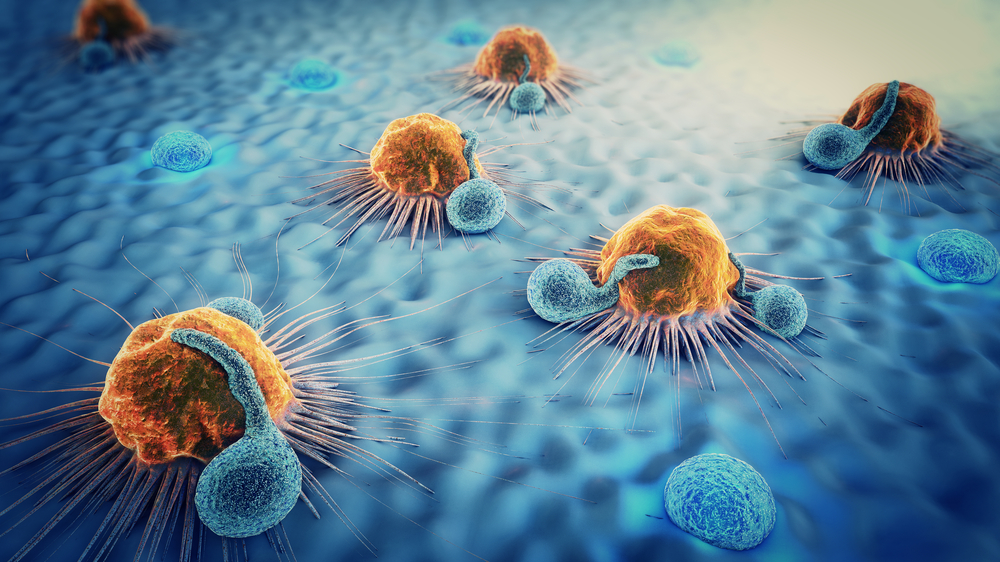 Researchers at Harvard have described a new cancer vaccine approach that uses an injectable biomaterial scaffold to deliver a payload of tumor-specific peptides that stimulate the immune system to respond rapidly to cancer cells.

Boosting the immune response to cancer

Recently, interest has grown in using neoantigens in immunotherapy, as their use has become increasingly predictable. In the new study, researchers injected a special programmable biomaterial structure, built from mesoporous silica rods (MSRs), that forms a 3D scaffold that summons and stimulates dendritic cells[1].

Dendritic cells are the antigen-presenting cells of the immune system; their primary function is to process tumor-specific peptides and present them on the surface of T cells. The MSRs are coated with polyethyleneimine (PEI), a polymer that is used to deliver DNA and proteins to target cells and is known to stimulate the immune system. The vaccine also had other factors that help to recruit dendritic cells and boost the immune response.

In order to highlight the potential for clinical translation, the researchers also designed a vaccine that presented the peptide of the E7 oncoprotein from human papillomavirus (HPV), which is known to cause cervical cancer. A single injection of the vaccine led to the total destruction of all HPV tumors in mice. The untreated mice died from cancer within 30 days, but 80% of the mice that received the vaccine lived 150 days or longer. A control vaccine that lacked the PEI coating and a traditionally made vaccine produced an effect only about half as potent.

Impressively, up to six months later after a single injection, the vaccinated mice were still able to destroy HPV tumor cells, as they had formed an immunological memory of the tumors and their peptides.

To simulate more aggressive cancers, and to highlight the potential of the therapy for translation to humans, the researchers introduced up to five neoantigens associated with mouse melanoma and colorectal tumors into the biomaterial scaffold. They observed that a single injection of the vaccine was able to clear tumor metastases and generated a robust immune reaction against the tumors that is comparable to multiple injections from current vaccines.

They also combined their vaccine with immune checkpoint therapy, a technique that also stimulates T cells to seek and destroy cancer cells; this combination created a synergy in which the effects of both were enhanced. The researchers believe that combining these two therapies could be the basis for a robust anti-cancer treatment.

Immunotherapy is a rapidly advancing area of research, and there have already been human trials of neoantigen therapy for other forms of cancer with promising results. The combination of the new vaccine system with checkpoint therapy adds another string to our bow in the fight against cancer.

The war on cancer really does seem to be taking a decisive turn in our favor, and immunotherapy looks set to become the standard of care in the next decade. This is a good thing, and the replacement of destructive chemotherapy and current, inefficient treatments cannot come soon enough.

No Sign of Aging in Long-Lived Bigmouth Buffalo Fish
0 Comments
Extremely long-lived bigmouth buffalo fish show no signs of a physiological decline with age, according to a new study. This clear example of negligible senescence in aging vertebrates demonstrates the […]
Posted in: News
Tags: Bigmouth Buffalo Fish, Cellular Senescence

Kizoo Technology Pledges €300 Million to Rejuvenation
1 Comment
It is always good to report on positive news for a change, and today is one of those happy occasions. Michael Greve, […]
Posted in: News
Tags: Forever Healthy Foundation, Kizoo, Michael Greve

Developing a Science-based Personal Longevity Strategy
0 Comments
There is one common public reaction to my talks that bothers me quite a bit. I am worried that after each of my lectures, […]
Posted in: Advocacy, News
Tags: Biomarkers, Geroprotectors

Vibration Reduces Cellular Senescence in the Bones of Rats
1 Comment
A new study published in the journal Aging has examined the effects of vibration on cellular senescence and osteoporosis. Superior treatments are needed for osteoporosis Typically, bone density peaks for individuals around age 30 and then declines with age. […]
Posted in: News
Tags: Bone, Cellular Senescence, Osteoporosis

Two Industries in One Field
0 Comments
Now that we are starting to see the arrival of actual therapies aimed at directly targeting the processes of aging in order to prevent age-related diseases, it has become […]
Posted in: News
Tags: Snake Oil