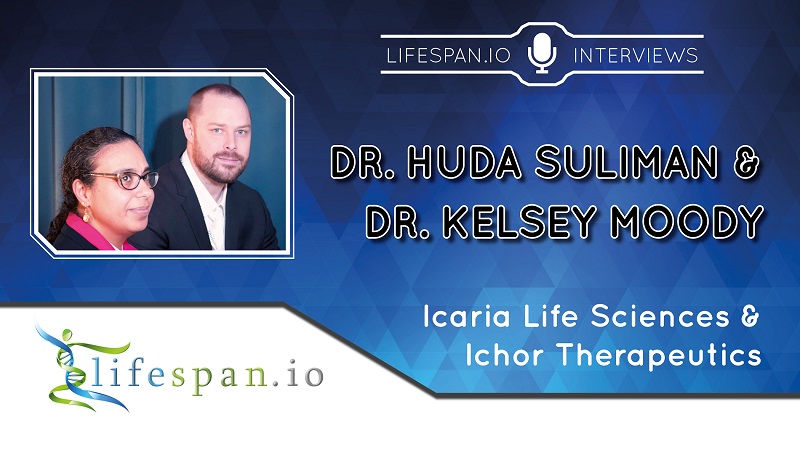 At Undoing Aging 2019, we interviewed some of the best researchers who are involved in discovering therapies for the root causes of aging. Their research aims to ameliorate the damages of aging and may one day lead to a future without the diseases of aging.

We were glad to have the opportunity to conduct a joint interview with Dr. Kelsey Moody and Dr. Huda Suliman. They offered several keen insights on the future of Ichor Therapeutics and the nature of the rejuvenation biotechnology industry.

K: I’m Dr. Kelsey Moody. I’m the Chief Executive Officer of Ichor Therapeutics and its portfolio of companies. Ichor itself is a biopharmaceutical company that does drug discovery in the aging space, and we have a variety of portfolio companies, each of which is designed to target a different type of age-associated damage. Through these companies, we’re developing classes of different drugs to move into the clinic for conventional therapeutic applications as well as, hopefully, more anti-aging targeted therapies as well.

H: I’m Dr. Huda Suliman, I am the president of Icaria Life Sciences, one of the portfolio companies of Ichor, which is a dedicated contract research organization that uses the technologies developed by Ichor to help others advance the aging space.

We talked not so long ago in London about how it helps forward the rest of the company’s aims. Can you tell us what kind of things Ichor is going to be doing?

K: One of the challenges in the aging space is that the kind of underlying discovery work that usually drives translational pipelines is really lacking, because the space is just so new. If you’re looking at molecular targets of cardiovascular disease, cancer, or things like that, a lot of these targets have been thoroughly vetted by academic institutions in the peer-reviewed literature, and you have some level of confidence that the thing that you’re going after is actually an appropriate target. But, because the aging space is so new, there’s lots of new targets that are being discovered, but there hasn’t really been enough time for academia to properly vet those targets. Some of them are very good real targets that we should be going after, and others are artifacts and might not actually be real or as impactful as we think. And so, at Ichor, we started doing, a while ago, a lot of contract work to try to help other companies that need to bring industrial-grade rigor to basic science and to early discovery and then move from that early-stage discovery work into full-on development programs, which are more akin to a traditional pharmaceutical pipeline. That contract work has grown; we’ve helped a lot of companies and worked with a lot of clients, and we’ve kind of run into a need to have dedicated teams for project management and really making sure that all of the client projects get plugged into the pipeline to get our best efforts and everything else, and that’s where Huda’s coming in and spinning out all of our contract research into Icaria Life Sciences.

It sounds like there’s a distinct lack of off-the-shelf solutions for aging research applications because it’s all so new, so you essentially set the infrastructure up to do that. The other groups can come to you and go “Hey, look, we’ve got this idea, and you’ve already got the setup.” Is that the general idea?

H: We have the setup, but we also have the expertise, so we can help those that are not familiar with the types of research that we do, help them design their studies and also give them the resources to get the data that they’re looking for.

I also have a locational question; I’m going to assume it’s probably yes. Is it in a favorite place in the US; is it in Lafayette?

H: Yes, it is in Lafayette.

It is, and for all the reasons that we talked about in our last interview: it’s a good place to buy the actual real estate, due to the economic situation there. You’ve got lots of intellectual resources nearby with the universities and things like that. You’re basically taking over the entire state by the sounds of it; everybody seems to be moving to Lafayette. Isn’t Repair Biotechnologies there as well?

We were very excited to be an early investor in Repair Biotechnologies there; they’re based in the Syracuse area as well, and I think they’ve recognized, as we have, that it’s a very ideal location to get work done because of its affordability but also access to infrastructure like airports, intellectual capital, and hard assets through the local universities. It’s kind of a perfect storm of a location, and it seems that others are recognizing that value as well.

Your background, I’m reliably informed, is that you were part of the defense industry.

H: Yes, I was part of a chem/bio defense group at a defense contractor, developing technologies to detect biothreat agents.

Interesting. It’s almost a complete opposite in many ways, I suppose. Kelsey’s managed to persuade you. He can be so persuasive.

Everybody is super impressed with what Ichor and Kelsey have been doing; how he has managed to find time to do a Ph.D. is beyond me. It’s beyond everybody. Congratulations on that as well, Kelsey. It’s just staggering how fast you seem to be progressing and becoming a major force. And on that note, what’s the first step for Icaria? Is the facility up and running?

Especially initially, Ichor’s going to be doing all of the backend work for Icaria, so even though Icaria will be managing client relations and helping to do study design and things like that, the technicians that are actually doing the work and all of the assays that are being performed, and so on, will Ichor staff. By separating the companies, though, this gives Icaria the ability to grow independently, particularly when it comes to project design: the needs for program directors and study directors to assist clients with designing their studies and making sure that they meet the appropriate endpoints and things like that. We have teams that do that for our own intramural work, and by splitting out Icaria, we can build teams that can do that in a way that is more catered to client work, the different kinds of things that clients require that perhaps our intramural programs don’t. Having that separation gives a lot of flexibility for Huda and her team to really provide what we hope will be a great client experience but with Ichor’s level of rigor on the back end.

I expect you’ve had to invest in a lot of new equipment as well recently to make that happen.

Yeah, so we recently scaled to about 50 employees, which are almost exclusively bench scientists or technicians of one flavor or another. In July, we’ll have completed construction on our new husbandry facility, which will allow us to do large animal everything, except non-human primate, we’ll be able to do in house. We’re also planning to offer GLP capabilities as well, which is essential for any translational program.

So there you go, guys, you heard it here first: if you need anything tested, especially in mice and whatnot for aging research, or related medical research in general, then it sounds like Icaria might be a great start. We wish you luck, and you guys are also sponsoring this conference as well in New York later this year, for which we’re extremely grateful. We’re looking forward to seeing you both there, hopefully.

K: Like every LEAF conference, we plan to attend en masse. We’re very much looking forward to the event. It was a great time last year, and we absolutely wouldn’t miss it. We’re pleased that we’re able to participate as a sponsor this year, as well.

We’ll have to see if we can organize an invasion of Lafayette at some point.

K: Absolutely. We’ve needed some human subjects for testing, so I appreciate you volunteering, Steve.

Well, I was going to ask you where are you keeping the zombies? Thank you both, and it’s great seeing you again in Berlin. We look forward to seeing you in New York.

NMN Boosts Effectiveness of Immunotherapy in Mice
0 Comments
In a pre-print paper, scientists have shown that treatment with NMN increases the survival and anti-cancer efficacy of CAR-T cells [1]. The problem with immunotherapy T cells are a […]
Posted in: News
Tags: CAR-T, Immunotherapy, NMN