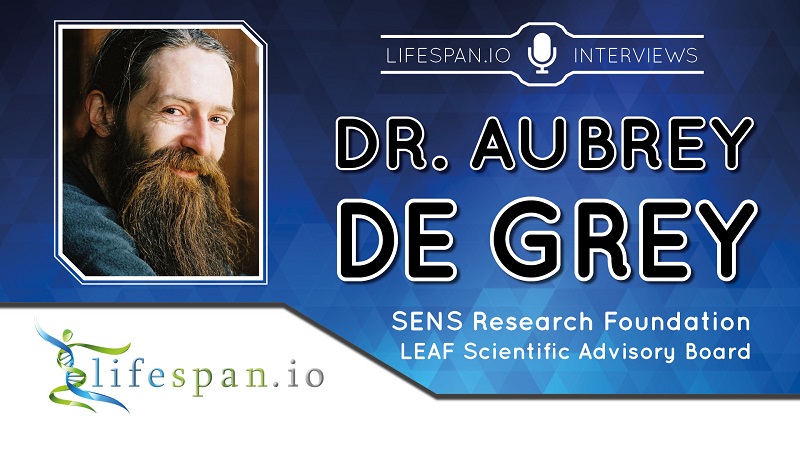 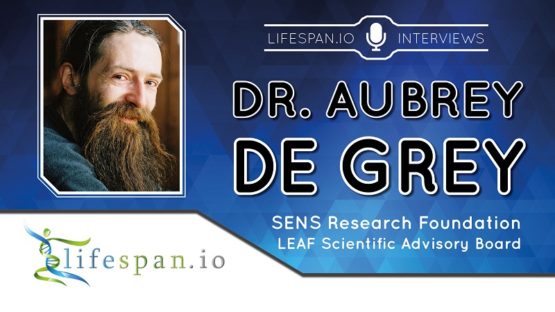 At Undoing Aging 2019, we interviewed some of the best researchers who are involved in discovering therapies for the root causes of aging. Their research aims to ameliorate the damages of aging and may one day lead to a future without age-related diseases.

We even had the chance to interview the well-known Dr. Aubrey de Grey, whose organization, the SENS Research Foundation, partnered with Forever Healthy Foundation to make Undoing Aging 2019 a reality. We asked him questions about how far SENS has come as an organization and what we can expect from future conferences.

How has SENS been progressing over the years, and what’s going on right now?

Thank you for asking; SENS Research Foundation has carried on plugging away, and we have benefited certainly quite a lot from the spike in cryptocurrency value that happened a year and a half ago almost now, which led to a number of large donations; we got a total of six and a half million dollars given to us over a period of about three weeks. We are being cautious in how rapidly we spend that, because we are not sure if it’s going to happen again. It still has meant that we have been able to start a couple of new projects and expand our education initiative, and so on, so we’re pretty happy about how that’s going. The thing that I really should say in answer to your question is not so much how SENS Research Foundation is going but how SENS is going, generally, in the wider world. The idea of comprehensive damage repair as a way to really bring aging under proper medical control and keep people youthful much later in life has now become completely mainstream. It’s been kind of reinvented by various groups over the past few years so that now it’s kind of become the orthodox way of thinking.

Moreover, the progress that’s been made in the laboratory by, of course, us with our various projects, and also by other people, has got to the point where these projects have become investable. They’ve got to the point where people, perhaps not every investor, but at least the more visionary investors who are comfortable with high-risk, high-reward activities, are getting in there. They’re seeing how to join the dots as a value proposition. The result is that we’ve, so far, over the past few years, been able to spin out half a dozen of our projects into startup companies and align in parallel with us. There’s dozens and dozens more companies coming along literally once a week, now, it’s ridiculous how rapidly, that are doing stuff that is very much rejuvenation, very much damage repair.

Better than that, the reason it’s happening is because the investment money is there. Investors are coming along and proving to be willing to write respectable size checks to actually keep this work going. Investors are coming to us as well. As kind of the spiritual leader of this field, asking for investment advice and investment opportunities, of course, I don’t tell them about the business side of things because I don’t know anything about that, but I can certainly help to guide people to the right kind of science that might be of interest to them. I’ve been doing that extensively over the past couple of years, and it has had great results. So I am extremely happy about the overall state of the SENS nation, so to speak. Certainly, we’re not done yet, but I can actually foresee a point, maybe only three or four years from now, where SENS Research Foundation can more or less declare victory and just become an organization focused on outreach and education, because all the actual research has been done very capably by other groups with private sector money. It’s a point that I always hoped we would get to, but honestly, it’s happened a lot more suddenly than I ever anticipated.

In terms of the seven deadly things that SENS plans to tackle, could you give us some examples of where we are specifically for each of them or some of them?

The best news at the level of SENS Research Foundation is that the most challenging, the most difficult components of SENS are now beginning to yield. We’re really now seeing very significant, dramatic progress, albeit still early stage, but going much faster than it was even a couple of years ago. The ones that are slightly less hard, for example, the removal of molecular waste products inside cells, those things have gone far enough that they have become spin-off companies. We’ve got two companies created that way: we’ve got a company that’s looking at the extracellular stiffening problem of restoring elasticity, and we’ve got a company looking at death-resistant cells, cells that are getting into a senescent state. This is all going amazingly well. That’s in addition to the continuing progress that’s happening on the easiest things that we never really used to work on ever because they were already being worked on quite capably by other people, especially with cell loss with stem cell therapy. All everything’s going well, but the most difficult things, in which I will especially include mitochondrial mutations, we’re now undisputedly the world leaders in these areas. Like, you know, these are lines of research that everyone had totally given up on to the point of being really certain that they were completely impossible and would never make progress. We just had the persistence to do enough to get there. It really is a great example of how the short term-ism that is imposed upon scientists by the system of science funding that exists worldwide has had an enormously damaging effect in stopping people from working on the most valuable work and forcing them to work on low-hanging fruit that doesn’t scale.

As a final question, how do you like how the conference is going?

We’ve only done less than three sessions so far, but everything’s gone perfectly; nothing’s gone wrong. We’ve had only two people that, for health reasons, couldn’t turn up. That’s par for the course for a conference like this. By the time you get this far and the conference is actually underway, it runs itself; anything that actually does go wrong, we find a way to cope pretty easily, so I’m not too worried. Of course, the main thing that I’ve got to say about this particular conference that blows my mind is the sheer number of people that are here. We have run conferences starting with my own conferences back in 2003. We’ve run lots and lots of them over the years, and they never grow; my first conference back in ’03, had maybe 200, 250 people, and all the other ones that I ran, that series in Cambridge, were about the same, fluctuating by 20 or so. We were not seeing any increase in enthusiasm, and so on, resulting from the work that was being done. That was the same with the conferences that we ran in California in the period like 2014 through ’17. It was also true for conferences that other people have run, they started but they’re not grown. Now, we may be just hitting that point where it’s take-off time. Last year, the first time that the Berlin Conference happened, the first one in Europe in five years since my last conference in 2013 in Cambridge, and it was big. It was 300 people; that’s on the high side. I thought, well, that’s great, but it’s probably just because I haven’t done one in Europe for five years. I was thinking this year, they’ll do really well to keep it at 300 people, and we sold out, which is 500 people; we literally were not allowed to bring any more people in because of the size of the venue and the fire regulations and so on. Of course, the people here, the local organizers for Forever Healthy played an enormous part in making that happen, no question. They have worked really hard, and they’re fantastically capable people, but, at the end of the day, I don’t think that’s enough. I think you’re only going to get this when the beginning is really happening: the beginning of the end, so to speak, or at least the end of the beginning as Churchill put it. So, yeah, I’m pretty happy.

I guess we can expect another conference like this next year?

We’re going to actually have a bigger venue next year because we expect that it’s going to be bigger. To be honest, the venue’s going to be maybe 20 to 30% bigger than this year, and that may very well not be enough. It’s going to be pretty interesting.

Let’s hope we can get to those numbers.

A Current Overview of Rejuvenation Techniques
0 Comments
Vadim Gladyshev and his team have published a review in Aging Cell about the current techniques and innovations in rejuvenation biotechnology, providing an overview of how these researchers see the state of […]
Posted in: News
Tags: Cellular Reprogramming, iPSCs, Parabiosis, Partial Cellular Reprogramming, Plasmapheresis, Vadim Gladyshev

Objecting to Rejuvenation is Objecting to Medicine
0 Comments
Some people are uneasy about the idea of extending human healthy lifespan by using rejuvenation technologies that target the aging process directly. Even people who accept the possibility […]
Posted in: Advocacy, News
Tags: Advocacy, Ethics, Future medicine, Treating aging