Funding Successful. This project reached its goal before September 18, 2016.

Note: $15,000 in Matching Funds has just been announced for this campaign. This means that every dollar donated up to and including the goal of $60,000 will be matched by a dollar from the fund. Please see the update tab for more information about this exciting announcement!
————————————————————————————————————
Of all the risk factors associated with cancer: obesity, smoking, sun exposure etc., there is none more universal than aging. According to a 2011 report on Global Health and Aging, the number of people aged 65 or older is projected to reach 1.5 billion by 2050 and correspondingly the yearly number of new cancer cases alone is estimated to reach 27 million by 2030. Therefore it is of paramount importance to develop new anti-cancer approaches to meet the humanitarian and economic challenges associated with our aging global population.

One such approach is to target cancers that employ a particular mechanism to achieve cellular immortality — Alternative Lengthening of Telomeres, or “ALT”.

Every time a normal somatic cell divides, the DNA at the ends of its chromosomes, called telomeres, gets shorter. When the telomeres shorten too much, the cell permanently stops dividing and either enters senescence or undergoes apoptosis (programmed cell death). Telomere shortening thus acts as a biological mechanism for limiting cellular life span. Most cancer cells bypass this failsafe by synthesizing new telomeres using the enzyme telomerase.

Several therapies targeting this well-described telomerase-based pathway are in the advanced stages of clinical development, but as with any cancer therapy there is the potential for development of resistance against telomerase-based strategies to defeat cancer. Studies using mice and human cancer cell lines have demonstrated that cancer can overcome the loss of telomerase by using a telomerase-independent mechanism called alternative lengthening of telomeres (ALT). Furthermore, existing tumor cells in mice have also been observed to switch over to the ALT pathway as a result of telomerase-inhibiting treatment. It is therefore plausible that telomerase-dependent cancer treatments will introduce selective pressures in human tumors to activate the ALT pathway and/or select for cells already using ALT within the tumor. This makes the development of ALT-specific therapies imperative for the success of complete anti-cancer approaches.

There are currently no ALT-targeted anti-cancer therapeutics, however, largely because this process is much less well understood. In contrast to telomerase-driven telomere lengthening, which does occur in the stem cells of healthy tissues and organs, ALT activity is not found in normal human postnatal tissues. A positive side of this fact is that this would allow for more-effective dosing with minimal side effects. ALT is present in some of the most clinically challenging cancers to treat, such as pediatric and adult brain cancers, soft tissue sarcoma, osteosarcoma, and lung cancers. Clearly, targeting ALT is a very attractive strategy in the development of novel cancer therapies.

Edward James Olmos describes the relationship between Telomeres and Cancer

Unlike the telomerase pathway, the precise enzymatic details of the ALT mechanism are not yet well understood. The presence of ALT activity has often been inferred from detecting telomere-related phenotypes, such as long and heterogeneous telomere length distributions or ALT-associated promyelocytic leukemia nuclear bodies (APB), which indicate the abnormal presence of telomeres inside a complex formed from otherwise ubiquitous nuclear proteins. These markers are not entirely satisfactory, as they can sometimes yield inaccurate results and are not practical for high-throughput applications or clinical laboratories.

A key step towards the development of ALT-targeted cancer therapeutics and diagnostics was the discovery of the first ALT-specific molecule, the telomeric C-circle, by our collaborator, Dr. Jeremy Henson, back in 2009. C-circles are an unusual type of circular DNAs that are created from telomeres. The level of C-circles in cancer cells accurately reflects the level of ALT activity, and this biomarker can be found in the blood of patients who have bone cancers positive for ALT activity. The OncoSENS research team at the SENS Research Foundation, in collaboration with Dr. Jeremy Henson at the University of New South Wales in Australia, has developed a novel version of the C-circle assay that can be fully automated using robotic liquid handlers, making it now feasible to perform robust high-throughput screenings to search for chemical modulators of the ALT pathway. The project workflow is detailed in the figure below:

The goal of this project is to screen a library of about 115,000 compounds containing structurally diverse, medicinally active, and cell permeable drugs from a variety of fields of medicine (oncology, cardiology, and immunology, etc.), for inhibitors of the ALT pathway. The crucial advantage of making use of such drug libraries, which are richly documented and contain some FDA approved compounds, is that once hits are identified and validated using our ALT-specific assays they can potentially be repurposed for the treatment of patients with ALT cancers through cheaper, faster and safer preclinical and clinical validation protocols. Our initial goal of $60,000 will allow us to test a significant subgroup of this library, and reaching a stretch goal of $200,000 will allow us to test them all.

The human ALT cancer line U2OS will be used in all experiments. This cell line was derived from a patient with osteosarcoma that was positive for ALT activity already and is commonly used in the literature. These cells will be cultured in media containing several different concentrations of the drugs in the library in a multi-well high-throughput screening (HTS) format. Genomic DNA will be extracted from these cells and these samples will be processed for the HTS C-circle assay especially developed by our team using a fluorescence-based method. Analysis of the changes in these fluorescence signals will allow us to identify compounds that most efficiently reduce C-circle levels and thus significantly inhibit the ALT pathway.

We will also be able to identify the concentration at which this inhibitory effect is maximal by testing these compounds at a variety of concentrations spanning different orders of magnitude. The C-circle signal will be normalized by the amount of genomic DNA present in each sample by using a commercially available dye that binds double-stranded DNA specifically. These data can also be correlated with cell viability for each drug.

Based on the conservative estimate that 10 percent of cancers employ an ALT strategy to achieve cellular immortality, there are about 1.4 million new cases and 820,000 deaths globally due to ALT cancers every year. We expect these numbers to at least double by 2030 as the world’s population ages and telomerase-based anticancer therapies gain approval to treat cancer patients. Therefore, the development of ALT-targeted therapies is critically needed in the fight against aging and cancer.

Please help us control ALT and thus delete the burden of cancer from society at large. 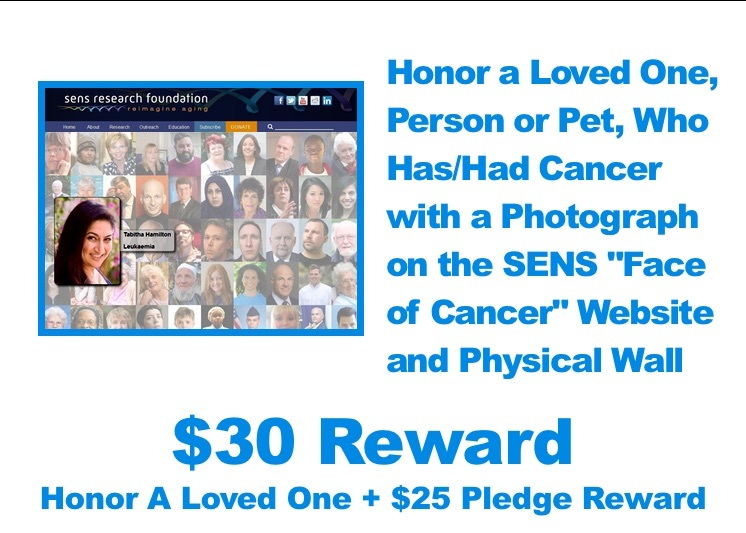 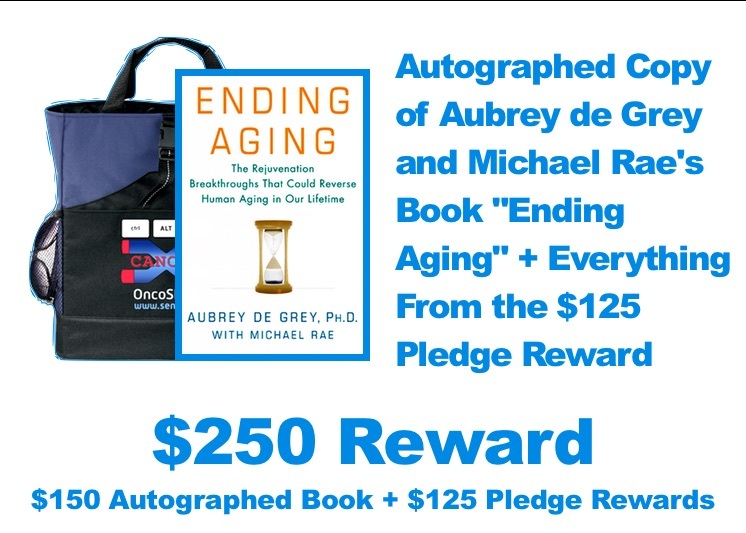 We are excited to announce we have just received a $15,000 Matching Grant for the OncoSENS campaign, which means that every dollar donated by you will be doubled up to and beyond the campaign goal of $60,000! We are simultaneously announcing a 30-day campaign extension. A big thank you to Christophe Cornuejols and an anonymous donor for supplying these matching grant funds. Please see the announcent from our recent Rejuvenation Biotechnology Conference here, starting at 5m19s:

Hello everyone! Now you can see where the work for our project will take place in an awesome new way: join Aubrey de Grey, Chief Science Officer of the SENS Research Foundation, as he gives you a tour of our Mountain View, CA Research Center and discusses our Control ALT Delete Cancer Campaign. Please enjoy the video and support us. Our gratitude to Philippe Van Nedervelde who filmed this with his Virtual Reality Camera.